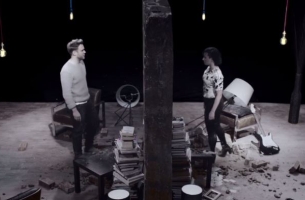 Post-production for Fulwell 73’s new promo for Olly Murs’ latest single has been carried out at ENVY. Ben and Gabe Turner have directed ‘Up’, featuring Demi Lovato, which includes a striking grade from colourist Vicki Matich.

Murs and Lovato star in the stripped back promo, set entirely within one minimal setting. In what is a darker, more explosive film for Murs, the singers are separated by a brick wall and torn apart by an emotional battle.

The minimalistic attention to detail within the bare room is enhanced by the grade, which creates a dark, shadowy atmosphere to befit the lyrics. Vicki comments ‘Ben wanted this promo to look unlike anything else Olly Murs has done in the past, and at first was considering black and white or close to it, something very cinematic. After trying a few scenarios to see what we had to work with, we bled out most of the colour and picked out a handful of colourful objects within the frame to bring out the contrast.’

She adds ‘There were many layers of saturation over desaturation and keys upon keys. Matching two different cameras is always a challenge, and also Demi’s blue hair didn’t always catch the light which made it difficult to bring it out in some parts… there was lots of keyframing going on!’

Vicki says ‘We’ve worked on Fulwell73 projects before but never with Ben and Gabe, but it was great fun and I think it looks really unique, suiting the emotion of the song perfectly.’

Flame, Nuke and 2D work was also completed by ENVY.