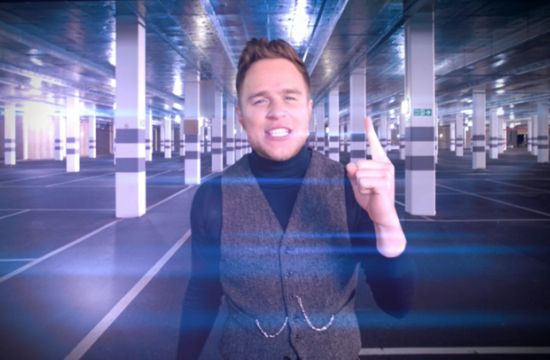 Nearly 80 - that’s how many Olly Murs Framestore composited into this promo for the singer’s new song Army of Two. This VFX extravaganza is another collaboration with director Vaughan Arnell, following on from a trio of promos for One Direction and with a brilliant grade from Simon Bourne as ever.

During the shoot we needed to achieve a seemingly continuous track back, whilst panning and tilting with the action. Framestore’s Head of Flame, Ben Cronin, explains: “With limits on the track length we settled on a series of 25-30 second moves with a motion control track, using the full 4:3 sensor at 3K and locking the cameras tilt and pan.” To create the 30 second moves, a 600' track still needed to be laid to enable the shoot.

“We rotoscoped/soft masked and composited the Ollys at 3K. To achieve the camera moves we didn't ‘pan and scan’ but panned the Flame camera around the 3K image, which produces a more realistic result. Along with that we countered the lens distortion before and re-distorted after to reflect the zoom lens changing its field of view.”

“This method meant that we only limited to a motion control track back on set and could pick and choose the best action to focus on whilst also being able to time and design the transitions between each 25 second segment with absolute freedom. It's not a particularly new method but there is now enough resolution in the cameras to allow a reasonable amount of zoom. It did however mean we composited nearly 80 Ollys at 3K 4:3 though, which was somewhat time consuming!”

"We were totally blown away by Framestore's approach to this video on every level from initial conception to delivery" says Rokkit Producer Astrid Edwards. "The core VFX team were involved from the outset which was invaluable as it took a good three weeks of full-on maths collaboration between us, camera, grips and post production prior to shooting to time out each sequence to the last frame, last bar, last note. It was immensley complicated and extremely time consuming but neccessary for the idea to work."

"Once again we were totally supported by Framestore every second of the way - we really are supremely grateful for all the great work everyone did on this project and so happy with the result. Without Ben, Will and Helen's unwavering expertise and commitment it just simply wouldn't have got done in the small time we had to do it nor to such a high standard. Another fine collaboration for Rokkit and Framestore with many more to come."

Senior Colourist Simon Bourne was asked to created a high contrast, rich look that changes as the flares come in and out during the artist’s walk to the camera, as well as reducing background colour to make sure the focus was on him. "My job was to ensure the continuity as the many Ollys walked through the light changes in the car park” says Bourne.

“I was also tasked with stripping all the colour out of the tarmac and pillars, which had purple stripes, as well as reducing the colour elsewhere in the promo to give it a more abstract look, but increasing colour in the roof to help focus on the Ollys more. This was a challenging grade as there are no cuts but there are many dynamic grade changes throughout to ensure a smooth transition, making it look like a simple set up."