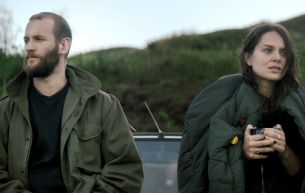 Walker, signed to Relentless Records, continues to underline his name as one of the stories of the year so far and is currently blazing up the BBCR1 playlist with this stand-alone track which was co-written and produced by Naughty Boy. Placed alongside Stormzy, Anne-Marie and Sampha on BBC Radio 1’s officiate BRIT list, Tom has gone on to mark his breakout year with a flurry of critical acclaim across heavyweight tastemakers including The Sunday Times, Pigeons & Planes, Wonderland, Shortlist and MTV; with sell-out shows in LA, NY + London.

Wolf gives 'Heartland' the kind of tumultuous, emotive visuals you’d expect for a people’s anthem, bursting at the seams with feeling and struggle. In this three minute short, shot in the heartland of Britain, Ollie explores themes that are rippling through British society today, by following an unlikely pairing who are both seeking a journey to a better life.

“I’m not sure people realise that modern slavery exists in this country and although loosely implied, it was something I wanted to explore and shine a light on with this film. That, twinned with the concept of patriotism having a shelf life fascinated me. What would make the most British of British men lose respect and admiration for the country they were born in? This was my starting point for Heartland and the road trip of this unlikely couple grew organically from there.”

From the landscapes, to the characters we encounter, this is a road trip that paints an honest picture of England today and what happens when you lose respect for the place you call home.

FreedomUnited are a charity that are helping to end modern slavery. Click here to view their website.