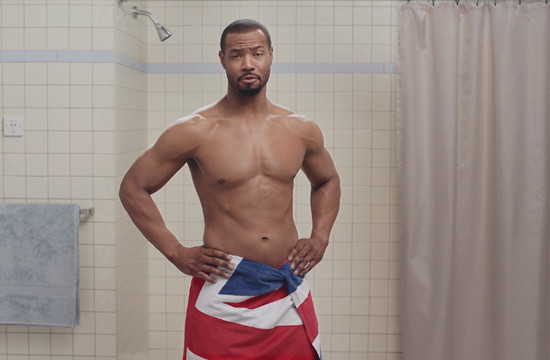 The face of Old Spice and legendary man’s man, Isaiah Mustafa, is coming to the UK to go on a nationwide ‘Gentleman Hunt’. Isaiah is embarking on a fact-finding mission across the UK to find out what makes the UK man so manly.

The UK is a diverse place, made up of many regions all with their own unique gentlemanly idiosyncrasies and characteristics.  However, what unites them is that the UK male has something unique, something that no other man in the world can truly claim, the ability to be a GENTLE-MAN. It is quintessentially British, and from this day forth, Old Spice is empowering every single male in the UK to become the man they could be; The GENTLE-MAN.

In it, he invites viewers to upload photos, films and share their views on what defines, in his words, “the modern British gentleman”. Isaiah will also be filming his own responses to some of these observations.

To mark the launch of the ‘Gentleman Hunt’, Isaiah will take the traditional gentleman’s preferred mode of transport, a horse-drawn carriage, through London with his trusted steed Sebastian, before travelling across the UK observing and exploring distinctly British notions of gentlemanly behaviour. Each of the regions he explores will be featured in six films relaying tales of manliness specific to those parts of the country, to air on Facebook and Instagram.

Paolo Nieddu, Strategy Director at Holler commented: “By anchoring the campaign in genuine regional insights about the UK man, or Gentle-Man, in an entertaining way and played out through the lense of the Old Spice guy as well as key influencers on Instagram, we are able to show that Old Spice truly understands men in the UK.”

Additional info: New research by renowned manly fragrance Old Spice, commissioned to mark the launch of its new Gentleman Hunt campaign, provides interesting insights into the modern British man and proves men are still proud to embody traditionally held views of masculinity. The poll of over 2,000 paints a picture of a much more traditional man than many would lead us to believe.  A real man pays the bill on a first date (52%) and despite celebrity trends, less than two in 10 men thought a modern man would be comfortable wearing speedos or a sarong (18% and 15% respectively). The most appealing characteristic in a man’s ideal partner is to be great in bed (41%).

In fact, being good in the bedroom was considered significantly more important than more homely qualities such as being a fantastic cook (21%) or a DIY whizz around the house (4%) amongst men.   Whilst, British men consider their partner’s bedroom performance to be paramount, it was not considered as important by women with only 19% feeling the same.

The Old Spice research also revealed further interesting insights including you’re more likely to have been stood up on a first date if you live in the North West (19%) and when it comes to the younger generations they are more likely to think it’s important that the man initiates a first date than their older counterparts (23% of 18-24 year olds compared to only 14% of both 45-54 year olds and those aged 55 and over).