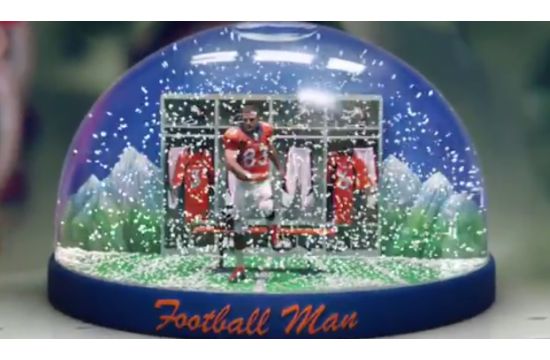 After seven long months, the NFL season is back and with it comes a new hilarious advertising campaign from Old Spice, "The Official Deodorant and Body Wash of the NFL". The campaign also kicks off two new Old Spice Guys.

The campaign will make its national television premiere with "Snow Globe" during the NFL opener—Denver Broncos vs. Baltimore Ravens—on Thursday, Sept. 5 (NBC), where our Old Spice Guy Wes Welker will be making his on-the-field debut for the Broncos and his off–field debut...well, in a snow globe!

Three additional 15-second spots will roll out on television over the course of the NFL season, but before kick-off, Old Spice is giving its loyal fans a preview of spots "Coach," "Lizards" and "Absent" on their YouTube brand channel. The campaign is also supported by print.

CLIENT                Old Spice
PROJECT NAME    Old Spice NFL
SYNOPSIS OF SPOT    This advertising campaign chronicles the stories of NFL athletes being swept away by the unnecessary freshness of the Old Spice Fresh Collection. The smell is so fresh nothing else matters – not your job, your coach, your legs or current situation.
CLIENT CONTACT    Sean Lee | Jason Partin
LAUNCH DATE    9.5.13
DURATION OF CAMPAIGN    September 2013 – December 2013