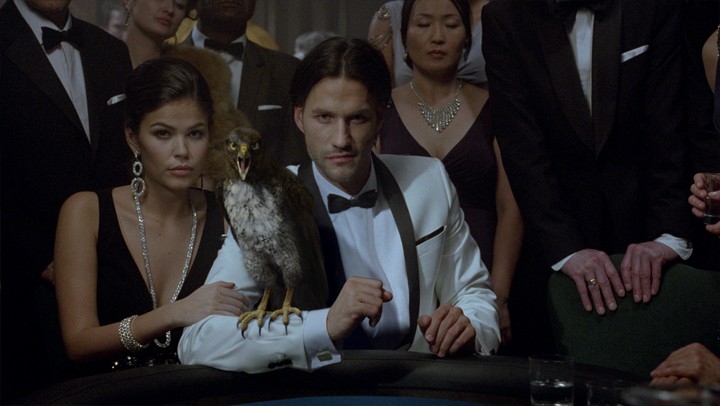 In another collaboration with director Tom Kuntz and Wieden + Kennedy Portland, Framestore has helped create two tongue-in-cheek spots for Old Spice where the animal embodiments of each range intimidate or captivate in equal measure.

In this spot, Poker Face, a card player is put off his game by his opponent’s flock of menacing hawks, which no one else seems to have noticed. Equally unaware of Old Spice’s powers is the beautiful woman in Irresistible, who’s enthralled by a man with a pair of snarling wolves hanging around his shoulders. She knows he’s “different somehow”, but she just can’t quite put her finger on why…

Our R&D team researching hawks and working on look development as soon the job was awarded and Alex Thomas supervised the shoot over a number of days in Prague, making sure Framestore had all the reference material and camera and lighting information it needed, including stand-in taxidermy hawks to help see how the light reacted on feather surfaces.

The production on Irresistable leant towards the in-camera performance of the animatronic, which Framestore then built on, but this was less possible for Poker Face's Hawks, so full CG birds were settled on.

A gift from the Hippogriff

The full CG creatures made Hawkridge the more challenging spot. “We have created loads of CG birds over the years but generally they are in flight” explains Senior Producer Graham Dunglinson. “The challenge with this spot was that the birds are basically static, apart from their screeching! This gives the viewer far more time to truly inspect the photorealism. On top of that there were 12 different hawks that all had subtle variations. It really was a lot of feathers to render.”

“Rendering feathers that look completely real is always a challenge. At Framestore we developed an amazing propitiatory feather system for the Hippogriff in Harry Potter and the Prisoner of Azkaban. At the time it was completely ground-breaking and those months of R&D were an amazing starting point. Over the years we have taken this as great reference for new systems to push what it is possible to create digitally.”

The challenge for both spots was getting a comedic performance from CG or partly CG creatures that still retains a high level of realism, but this was helped by the great director and agency team says Alex Thomas: “The director, Tom Kuntz, is not only brilliant at what he does, but great to work with. He has a clear vision of what he wants, but is not too rigid, so the process is enjoyable. Combined with a fantastic agency team, and the highly talented DP Jan Velicky, the shoot was a highlight, despite the heavy schedule!”

On CG heavy projects such as Old Spice, Framestore is more and more frequently following a feature film pipeline in terms of colour management, streamlining the integration of lighting reference material, and providing ultimate control and flexibility to the client, to grade or regrade, once the VFX have been completed. The grade is established at the beginning, but not committed, so as the VFX evolves, so can the look.