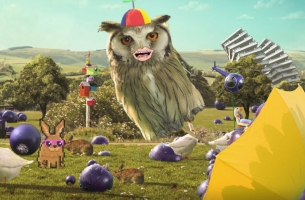 J. Walter Thompson’s first work for Ribena since being apppointed to the account sees the brand being re-launched with a significant strategic shift in its positioning and advertising style.

By creating a new and playful Ribenary world the fruit drink is primarily now targeting a pre-family audience of young adults with its wide range of ready-to-drink flavours.

The new creative idea brings to life the moment of tasting and feeling Ribena with an intense visual depiction of a Ribenary world.

The work includes the new line “You can’t get any more Ribenary”, which research highlighted as the only way to truly describe the unique, bold taste of Ribena – Britain’s Number 1 Drink Now Juice Drink.

The spot, directed by Yannis and Christos at Nomint and launching on 7th August for an 8 week burst uses an eclectic mix of unique photo-montage animation. It includes original music track ‘Zooby Doo’, by London-based duo Tiger Monkey; a full length version has also been created and is available to download now on Soundcloud.

As part of the £6 Million campaign, the Ribenary elements will then be turned into social content with a host of interactive and sharable videos and GIFs. There will also be weekly competitions hosted on Facebook and aimed directly at the younger target audience (by Brass).

The campaign is brought into the real world through digital and outdoor posters, bus sides and experiential Crazy Golf sampling (by TRO) around Britain.

In-store activation by Geometry Global pushes the wide variety of ready-to-drink formats at point of purchase.

Hannah Norbury, Marketing Director at Ribena, Said: ‘We’re thrilled with the new campaign for Ribena. It’s the beginning of an exciting new chapter for this iconic British brand, and we’re delighted with this work developed with J. Walter Thompson that engages our young adult audience through our new brand positioning.’

John Cherry, Creative Director at J. Walter Thompson, said: “The chance to work on a brand like Ribena is always a great one, but to be able to launch a new direction is amazing. We’ve attempted to create an intense, playful and visually striking campaign bringing to life the almost impossible-to-describe taste of Ribena.”