The energetic promo campaign is driven by Sia’s 'Unstoppable' track 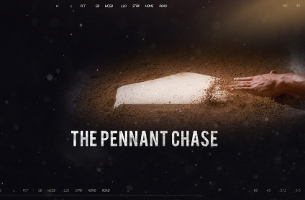 Using the powerful track 'Unstoppable' from multi-platinum artist and songwriter Sia, Oishii wanted to bring the fans onto the field to experience the Postseason from the players’ perspective. Produced by MLB Network, the campaign features key moments from game footage juxtaposed against macro elements of America’s national pastime.

“We wanted to capture the moments -- those split seconds -- that could decide whether a club’s season is over or it’s moving another step toward the World Series,” explains Chief Creative Officer Ismael Obregon, Oishii Creative.

Images of flying grass as outfielders race to make the deep-field out, catchers closing their mitts around the last strike of an inning, and hands swiping across home plate to steal the winning run form the foundation of a photographic library meant to bring fans closer to the game. Overlaying driving phrases like “Uncommon,” “Unexpected,” “Unforgettable” and “Unbelievable” emphasise the on-field heroics of big leaguers.

Two spots of the “The Pennant Chase” campaign are available here and here.

For Oishii Creative, the project was an opportunity to bring together its expertise in sports branding, live-action and design.

“We went for a cinematic, big and bold approach that would not only resonate with audiences, but also let them experience the game from the POV of the player on the field,” remarks Obregon. “Working with MLB and MLB Network was fantastic.”

Oishii Creative shot the macro elements on the Phantom camera at ultra-high frame rates, which allowed them to capture the slowest of motion without sacrificing resolution. All of the elements, while stylised, are unmistakably and authentically Major League Baseball. The low lighting and macro shots provided the perfect backplates for typographical elements, which are based on the “Unstoppable” concept inspired by Sia’s hit song. The typography and logos were then treated to visually connect with the explosive grittiness of the baseball highlights.

Oishii Creative used all of these assets to develop a flexible promo toolkit that allows MLB to make on-the-fly promo updates and adjustments to keep them fresh and impactful in the buildup to the World Series. MLB is rolling out 10 team-specific spots for those that make it into the Postseason and nightly tune-in through October, as well as hundreds of versions to be played across MLB’s TV partners, including English partners ESPN, FS1, FOX, MLB Network, and TBS; Spanish partners CNN En Espanol, ESPN Deportes, and FOX Deportes; and international TV partners.