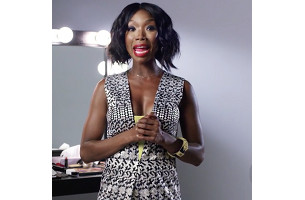 Creative solutions company Oishii Creative recently worked with BET to create a promotions package for their new sitcom Zoe Ever After. The package includes 15 makeup tutorials for BET’s YouTube channel, as well as a :30 on-air spot intended to drive traffic to the channel, which supports the new program. The season finale airs on Tuesday, 2/16 at 10 pm ET/PT.

Zoe Ever After is a multi-camera romantic comedy that follows Zoe Moon (Brandy Norwood) as she navigates life as a newly single mom with a burgeoning career as a cosmetics company mogul. Zoe’s role as the owner of a cosmetics line inspired the makeup tutorials, which feature Norwood and her real-life make-up artist, Renny Vasquez.

“With the rise in popularity of beauty vloggers, we felt like developing online makeup tutorials would be a great way to provide interesting content to viewers while still promoting Zoe Ever After,” says Jerome Ford, BET Creative Director. “We wanted the tutorials to share helpful tips and tricks and to simultaneously engage viewers with the show.”

The tutorials, which rolled out in January and February, were directed by BET’s Ford, with Oishii Creative shooting the videos and providing editorial and finishing services.

“Keeping the shoot small and contained yet focused on a celebrity client was our main concern,” says Ismael Obregon, Oishii’s Chief Creative Officer. “We also wanted the tutorials to look professional and polished in keeping with the aesthetics of popular beauty vlogs.”

In addition to the tutorials, the team developed an on-air promo in which Norwood encourages viewers to checkout the YouTube channel’s offerings. The :30 promo was also created in :15 and :10 cutdown versions. To further tie this promo and the tutorials to Zoe Ever After, Oishii used the show’s theme music in their sound mixing.

The final product is a set of tutorials that range from shorter clips that share beauty tips of the week, to longer, how-to segments that teach viewers how to replicate looks from Zoe Ever After. In addition, viewers can enter to win actual Zoe Moon-branded cosmetics.

“These tutorials do a great job of blending themes from the show with information Zoe Moon fans can appreciate and hopefully use in their everyday lives,” concludes Obregon. “They’re an example of multi-channel marketing done well.”