Oh Snap! So That’s How You Create a Successful Snapchat Campaign…

Trends and Insight 717 Add to collection

LBB’s Paul Monan explores how Drinki, giffgaff and Gatorade are pushing the boundaries of Snapchat’s filters, lenses and Snap Ads 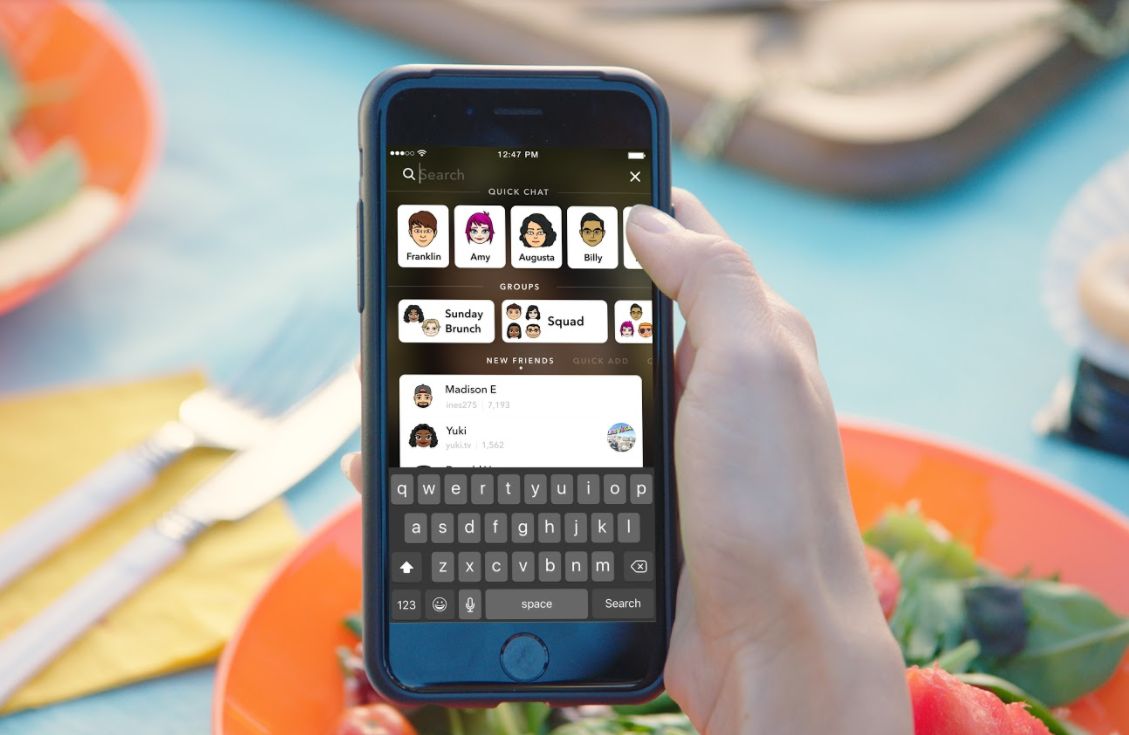 Every day, over 166 million people across the world are using Snapchat, with 60% of the app’s daily users hailing from the world’s top ten ad markets – including 65 million a day in North America and 55 million in Europe. No wonder it’s become a burgeoning platform for advertiser’s over the last few years.

Dubbed ‘part Final Cut and part After Effects’, the browser-based tool lets advertisers easily edit and animate ads without the need for often-expensive video editing software. It’s a tool that’s ideal for smaller brands, such as Drinki - a London based app that sources free drinks and drinks deals in London’s best bars - which is using Snapchat to generate its own advertising for the app without the help of agencies.

“Snapchat have released an ad publisher which allows marketers to make up their own creatives in a few easy steps, all you need in some kind of visual to hand. Since we’re a lean team and we don’t have a dedicated motion designer, this has been super beneficial for us, so I can throw my own creatives together with b-roll I’ve filmed previously. I'm aiming to make our ads look more native than flashy, so even filmed our first few ads on a mobile phone and edited emojis on them in iMovie,” explains Hannah Parvaz, Head of Marketing at Drinki.

“I’ve been running campaigns on the platform for around two months now; the first few weeks were a little rocky, but in the last couple everything has been going exceptionally well, even to the point of eclipsing anything I’ve seen on some other platforms,” she adds.

The app’s users are millennial, tech savvy, and completely hooked – just like Snapchat’s. With a core audience aged 22-28, exclusively located in London, it’s important for Drinki to be able to target users on a city only basis. Rather than having keywords or interests, Snapchat has defined a number of categories for its users, such as nightcrawlers or liquor buyers, allowing them to be grouped algorithmically rather than based on a key action such as liking a page. For Hannah, this means she’s able to get right down to the nitty gritty of who might be using the app.

“The Drinki Summer Party is on Sunday so I’m planning to get our first ever geofilter up and running then,” she adds. “Based on the performance of the app install campaigns, I'm really looking forward to seeing how it goes.”

It’s likely that the geofilter will prove a success, with over two thirds of daily Snapchatters creating content every day. In the UK alone, there are over 10 million daily Snapchatters, 31% of whom watch less than an hour of TV a day. It’s an audience that’s increasingly harder to reach but of vital importance as 60% of interactions on Snapchat are between close friends – the most influential when it comes to driving purchasing decisions.

Meanwhile, over at giffgaff, a UK-based mobile network, Snapchat has proven to be a handy channel. According to Brand Director, Tom Rainsford, it’s a useful place to drive brand awareness and consideration around the broader campaigns they run. It may not be driving people to buy a product - but what it does do is increase exposure.

“It’s a channel that people want to play with and have fun with their friends, looking at filters, sharing snaps, consuming content within certain areas. It’s about you sharing what’s happening in your life, right now, with your mates,” explain Tom. “It’s is a very different, intimate platform, therefore from a brand point of view we want to use it in the most effective way that we can. For us, it’s about having a lot of fun with it, not about getting people to click out to a website all the time. It’s about driving awareness and consideration, delivering our brand personality in a way that people want to hear it.”

To support giffgaff’s summer campaign, in which a swimmer soars through space in a cinematic epic that’s all about freedom, the brand created a Snapchat Lens that went live on the same day that the spot launched on TV. It was relatively simple and mirrored the TV creative, but gave coherency to the main campaign whilst remaining relevant to Snapchat platform.

“We look at how people used the Lens and what the reach was, but more importantly how long did people play with it for? To us, that’s key – ‘play time’. How long is someone being exposed to something our brand is doing?” says Tom. “It’s fun. People want to engage with it and use it. It’s one of those platforms where you might be sitting on the bus or in front of the TV, people are still concentrating on Snapchat. It grabs your attention. We’re a playful, youthful brand and it would be odd if we didn’t use those types of channels.” 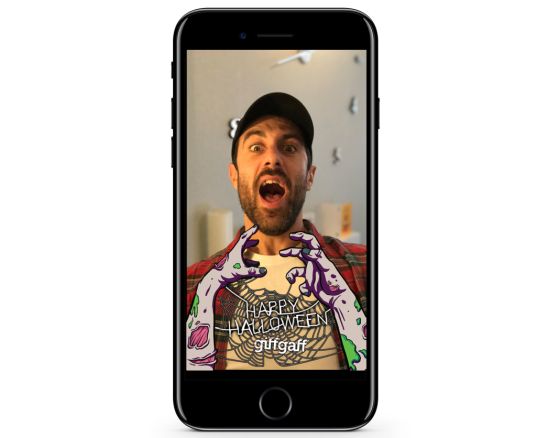 Since they first used Snapchat as a marketing channel in October 2016, when they created a cobwebbed Halloween filter, giffgaff have used the platform as part of a wider campaign. By doing so, they’re communication and spreading the main campaign message as broadly as possible in the time that it’s running.

“It’s a great channel for us to communicate a key message or theme in a time that suits us, delivered in a way that engages the audience. With any successful channel we will absolutely consider how we use it, when and where relevant,” Tom adds. “If you’re doing a serious campaign then it’s probably not a platform that will work for you, but our campaigns are always playful, fun and disruptive.”

When it comes to disruption, there aren’t many agencies that do it better than the ‘Disruption Company’ themselves, TBWA. Last year, the agency’s Chiat\Day LA office devised a pioneering campaign for Gatorade that pushed Snapchat’s capabilities to the limits.

With tennis superstar Serena Williams on the verge of a record-breaking 23 grand slams, TBWA and Gatorade set out to create a campaign that not only celebrate Williams’ success, but get a nation behind her in the run up to the US Open.

“We presented three ideas to the client. Two were traditional films and one was completely different. Originally, the idea was to get host a game inside Snapchat as if it were a natural component of the app, however this wasn’t possible. We didn’t want people moving to another place and clicking elsewhere, so we created a mobile website that hosted within Snapchat, meaning the audience never left the platform,” explains Renato Fernandez, CCO of TBWA\Chiat\Day LA.

Partnering with Ludomade, TBWA created Serena Williams’ Match Point, a 23 level, 8-bit game that was hosted within ESPN’s Discovery page during the week of the US Open. With Snapchat’s audience younger than most other platforms, and Gatorade’s target demographic being the competitive teenage athlete (aged 13-17), it was the perfect platform for a fiendishly difficult game. But there was a big challenge for TBWA to overcome: engagement time.

“The problem we had was the platform typically generates short engagement times, between three and seven seconds,” explains Renato. “We’re living in an era where people have an eight second attention span so we had to break the platform with something truly disruptive.”

And disrupt it did. The game engaged its audience for more than three minutes on average, with 36% of players sharing the game, racking up 226 million earned impressions. The numbers are incredible impress and its no wonder Snapchat now uses Match Point as a case study for best practice.

“We were really trying to tell the story of Serena’s career instead of simply using a filter or lens. The biggest challenge was how we could reinvent Snapchat in the best way for our client. If you don’t do that then the audience isn’t going to perceive the campaign as being any different. The main difference here is that the audience is getting a competitive quality through a narrative and aspirational calendar. People were sharing it on social media and the sense of competitiveness made people really dig it. The last level was almost impossible to complete but the players found a way, the harder it got the more were into it,” says Renato.

With Snapchatters visiting the app on average 18 times a day, spending over 30 minutes (up from 25 minutes in Q4 2016) on Snapchat daily, the engagement levels the TBWA garnered aren’t necessarily going to be a one off. In the UK alone, research shows that millions of Snapchatters are exclusive to Snapchat and can’t be reached by other mobile apps, so for brands such a giffgaff it’s a channel that requires inventive, attentive creative.

“What happened in the case of Match Point is part of an advertising transformation,” concludes Renato. “The advertising we used to see is gone. People think they need to live by the rules of the platforms, but I think the other way. We need to keep challenging social media; there is room for us to challenge Snapchat and Twitter. There’s always room for more breakthroughs.”