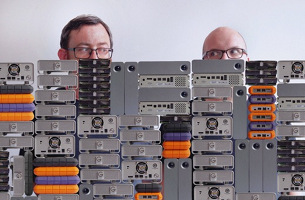 “It happened once in a really serious way. I was working for a big car company, doing a big online campaign for them. We cut the thing, everybody liked it and they wanted to re-cut it. The agency was based in the States and there were a few corruptions on the drive. It was about eight or nine years ago and we went to our back up drive and it was all gone. That’s a kind of sphincter-tightening moment. Luckily they were able to solve the problem and were able to cut around the corruptions on the drive but I didn’t recover because obviously I was never able to work for that agency again.”

Most people working in film production have experienced that ‘oh fuck’ moment. A misplaced piece of footage, a malfunctioning drive or convoluted politics can turn the deceptively simple task of digging out some rushes into a stomach-churning catastrophe. As a director, Keiren O’Brien is well aware of the potential fall-out that comes when no one is able to track down an old set of rushes – that’s why he and producer Paul McLoone are on a mission to save filmmakers from experiencing the stress, misery and lost business.

They’ve set up Film Locker, a secure method of backing-up and archiving rushes using safe servers and LTO tape, and they’re zealous about educating production companies about the importance of protecting raw footage and archiving it properly. They store four copies of the rushes on secure servers while a project is live (three months for a commercial and up to a year for a movie) so that it can be easily recalled, before transferring it to LTO tape for long term storage.  It’s increasingly common, they say, for clients to revisit commercial rushes to recut extended footage and search for unused material to use on digital platforms, meaning that the gut-lurching panic that comes when you find that the only back up drive has been corrupted, recycled or just plain lost is spreading throughout the industry.

These days, most rushes are captured as ones and zeros rather than physical reels of film – making keeping track of them a trickier prospect than ever before. A chunky silver can of film is somewhat harder to lose than an ephemeral bit of digital data. Hard drives have an 8-10 per cent chance of failure after three years – while, as Keiren reminisces, celluloid is so tough that he once used some unexposed film to tow a car out of a ditch. What’s more, given that digital space is seen as ‘cheaper’ than celluloid film, it’s often treated with less care and attention.

Part of the problem stems from the cavalier rock ‘n’ roll atmosphere that surrounded the rise of digital filmmaking. While traditional filmmakers had an almost military approach to roles and workflow in an effort to save on expensive celluloid costs (indeed many of the structures were implemented by veterans returning from the First and Second World Wars), the image of a modern digital-era filmmaker is of a kid with a camera who cuts and posts a spot in his bedroom. Properly structured workflow wasn’t exactly top priority in the digital revolution and practices have evolved in a haphazard way. “It was a kind of film punk moment,” muses Paul. “It’s fine to have a punk moment but we’re not punks, we’re professionals. It’s alright for artists but the industry still has to know what it’s doing.”

“In film, people can be careless,” he continues. “It’s a case of ‘just hand it back’. When you’re producing a job, a receipt comes back from wardrobe and it just lands on your desk with no cover letter or anything. It’s not done correctly. There’s a little bit of an element of just dumping things on someone else once you’ve finished your part of a job and thinking ‘it’s not my problem anymore’. The problem is, it’s not happening in any other industry’s IT. It’s not happening in banking. And the reason that it’s happening with us is that if you’re a producer, the files are so big that if you plug it into a computer you can’t check it. You have to ingest it all in because it’s so, so huge. Nobody’s dealing with files the size we’re working with.”

Indeed the sheer volume of data captured in modern digital cameras also makes the act of storage extremely tricky.  “The industry is now accumulating more data than any other industry in the world. The average capture rate for a day shooting on an Alexa for a commercial is anywhere between 200 gigabytes and 400 gigabytes. If you shoot raw codecs, at 4k or 5k, an average day is between 1.3 and 1.6 terabytes of data. It would take a bank or something six months to accumulate that volume of data. So when people talk about ‘big data’ and computing, it’s nothing compared to what the film production community is generating. It’s now across everything – TV, corporate, movies. The last movie we quoted on was 26 terabytes of data and they wanted to hold it for five years because of the complexities of financing and distribution,” says Keiren.

So if the data is so large and unwieldy, why bother storing it in such a format anyway? Well, the team says, it acts like almost a videogame ‘save point’. Storing the material in its purest format, before people have had a chance to tinker with it, makes it easier to revisit and rework.” A potato is better than a bowl of chips. If you’ve got a potato, you can mash it, makes croquettes, you can do a lot of things with a potato. Once you’ve got a chip you can have a cold chip or a re-heated chip but there’s not a lot more you can do with it. Data is the same.”

But the risk of data corruption when you’re storing your work on a hard drive in, say, the cleaning closet, pale into insignificance compared with good old fashioned human error. In an increasingly transient industry that relies on freelancers more than ever, keeping tabs on who is responsible for what has become something of a labyrinthine nightmare. Paul and Keiren have heard of instances where people have had all of their drives chucked into a skip, for example. Or freelance producers who have ‘saved’ a drive in a box with no label on it before leaving the country. No one is quite sure whose responsibility it is to look after what – which is why Film Locker-archived footage also comes with a certificate of responsibilities, making it clearer for all parties.

Another issue that’s making the prospect of Film Locker feel particularly timely is the fact that cloud-based servers are coming under increased attack from hackers – just ask Jennifer Lawrence. Film Locker’s servers are secure (“We use our own closed network so we are the only people that have access to the Film Locker servers,” says Keiren. “It’s done through dedicated pipelines that would require Tom Cruise at the end of a wire to break into.”), keeping them safe from online crusaders, industrial espionage and leering trolls on the hunt for that pre-touch up raw footage of celebrity spokespeople.

Although there’s no denying that Film Locker is most definitely a business, speaking to this battle-scarred director-and-producer team you get the feeling that there’s a higher vocation in all of this. They know that producers are, at heart, problem solvers and that these ‘oh fuck’ moments can have ruinous effects on professional and personal pride. Even the business model is described in communitarian terms. They’ve figured out that it would be unachievably expensive for production companies or even most agencies to install this archiving infrastructure on an individual basis as they’d need servers, a £2000-a-month pipeline and at least one full-time employee to check and monitor everything. Instead they’re trying to get the whole industry involved and chipping in collectively.

In the past six months or so, Keiren and Paul have seen increased uptake from production companies and agencies as people are slowly, but surely, coming round to the gospel according to Film Locker.  It’s a combination of clients demanding more online content and the desire to preserve brand heritage means that more and more agencies and production houses are fielding those awkward phone calls. So the question is: next time a client calls and asks you for their 18-month-old rushes, will you be thinking ‘oh fuck!’ or ‘fuck, yeah!’?

Get in touch with Film Locker at: http://filmlocker.com/
view more - Trends and Insight