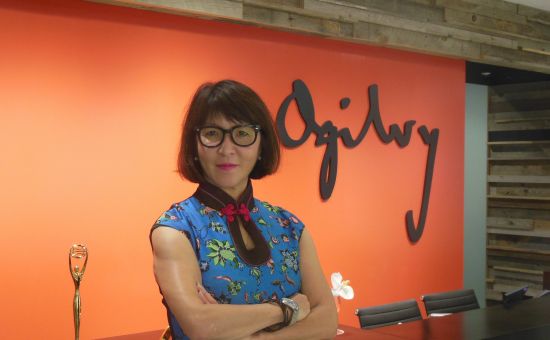 Prior to joining Ogilvy in June 2015, Abi Sekimitsu has led a fascinating career as a journalist and editor at Reuters and was in fact the first Japanese and first female to serve as Japan bureau chief, in the company’s 160-year history. She also served as managing editor at Microsoft, heading up Japanese digital content on the website, news app and smartphone.

Now working alongside president of Ogilvy & Mather Japan, Todd Krugman, Sekimitsu is responsible for leading content strategies for clients across all Ogilvy disciplines, and driving transformation for brands and companies.

Here she catches up with LBB to provide insight into what content solutions work best for a nation opening up to native advertising.

LBB> As the first Japanese and first female to serve as Japan bureau chief of Reuters, what were some of the challenges and highlights you came across?

Abi Sekimitsu> This answer is a bit of a fluke because not everyone gets an experience like this during their tenure, but the Fukushima nuclear disaster happened while I was bureau chief and there were moments that were a revelation on both the nationality and gender fronts. One was Tokyo Electric Power Co, the operator of the failed plant, telling foreign press that only male reporters can go on the first press tour. Apparently, the Japanese press had agreed to this but you can imagine how this went down with the foreign press. We protested and women were admitted in the end, but it was a surreal moment, one that I got to joke about when I was later sent into Tokyo Electric Power as a PR consultant. It was also difficult as a Japanese newsroom leader to deal with the many foreigners, including colleagues, who chose to leave the country for fear of radiation - understandable, but still difficult and sometimes divisive for the team.

LBB> As the managing editor at Microsoft how did you go about championing Japanese digital content on the website and news app?

AS> We first went with a news partner for the website - one of the national dailies - but it was difficult to control the tone and manner of the content on a co-branded site. It did not have the global feel that spoke to Microsoft's values. So for the Windows 8 app, we went for 100 per cent curation of partner content so that the look and feel of the news pages can be consistent with other Microsoft markets, with a heavy emphasis on photos and video. With Japanese content being more text-heavy than visual-heavy, it was difficult to keep it fresh and up-to-date. I think this characteristic of Japanese content is slowly changing though.

LBB> Are there any qualities that make a Tokyo news consumer audience unique to any other part of the world?

AS> There is a reluctance to speak out and a lack of political activism among young people so it's difficult for a journalist to gauge the national mood through their reactions to events. The media sophistication is surprisingly low - many people rely on aggregation sites for news and assume it's an authentic news source.

LBB> Setting up Reuters’s newsroom in Bangalore, India, how did you pioneer initiatives to enable Reuters to produce its news content offshore?

AS> Absolute commitment to standards and making sure it felt like a Reuters newsroom in any other part of the world. We had constant visits from editors from New York, London and elsewhere so that our Indian reporters learned firsthand what it was like to work as a Reuters’ reporter. We also made sure the top Indian reporters went on secondments to New York every quarter.

LBB> What kind of content solutions are Japanese clients looking for when it comes to reaching Japan’s youth segment - an always plugged in, switched on audience?

AS> It’s not so different from other markets - identifying the influencers among the youth and the channel with which they communicate and to join that conversation via brand stories that resonate. Japanese companies are aware they are behind in content marketing and want to know how things are done overseas.

LBB> Japan is known for its hip tech savvy people however the flip side to this is Japan has an aging population. As a content director, what measures can you take to reach out to them?

AS> It's not really a flip side - it's a continuum. Hip tech savvy people become hip tech savvy older people and the content needs to reflect their changing lifestyles and priorities. Fortunately, there are reams of research on Japan's aging population as every industry is tackling the same issue.

LBB> What attracted you to the position at Ogilvy Japan and what’s it like working alongside president Todd Krugman?

AS> What attracted me to the position was actually president Todd Krugman! We talked for many months, I asked a lot of questions and Todd introduced me to many colleagues and clients and I joined when Ogilvy and I were both ready. So it's obviously been great working with him.

AS> Native advertising is a new trend in Japan and there has been some discussion around it. The convergence of journalism and advertising copywriting will happen very slowly in Japan. They are very different industries with very different people. I am the first person I know who has done it - so, I'm not sure what my stance is after three months; please ask me in another nine!

AS> Japanese people are not comfortable with promoting themselves and this is also true for the brands. Because of the manufacturing tradition, the instinct for a brand is to let the product or craftsmanship speak for themselves, which is no longer enough because of global competition. So, authentic storytelling is especially important for Japanese brands as well as for the economy to stay relevant and competitive. But sometimes, they hit the jackpot, as in the award-winning Honda content from Dentsu.

LBB> How is your experience and skill set in traditional media best transferred across to advertising?

AS> I grew up in a fast-paced wire service newsroom. People in advertising want to experiment with real time content and a newsroom culture. I think we are a match made in heaven.

LBB> What are some of the key issues facing advertising content producers in Japan?

AS> The biggest issue is the dominance of the two domestic agencies that does not leave room for startups or international agencies. The second issue is the samey-ness of advertising content - not helped by the fact that there are only two players - most ads rely on celebrities to sell the product and the approaches lack distinction. Japanese talent are looking for more challenging opportunities and agencies like Ogilvy is the natural home for them. In starting the content practice, I am confident we have the most to offer Japanese brands because we have local specialists delivering services, which are held to the highest global standards.