Awards and Events 640 Add to collection 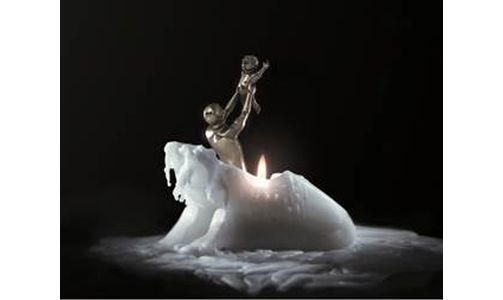 Ogilvy & Mather London has been awarded an inaugural Product Design Lion on the third day of Cannes Lions Festival of Creativity 2014, for its Amnesty International campaign ‘Freedom Candles’. Meanwhile OgilvyOne London continues to reap awards with a Cyber Gold Lion for its British Airways ‘Magic of Flying’ campaign.

‘Freedom Candles’ earned a Product Design Lion today, amongst an exclusive list of nine campaigns recognised for their applied use of physical products in aiding the communication of a brand ethos, as well as having a positive impact on improving people’s lives.

The powerful campaign is centred on three striking candle designs which represent injustices including torture, arms trade and sexual slavery. The wax figurines, created by globally admired artistic duo ‘Coarse’ - Mark Landwehr and Sven Waschk - burn down to reveal a lasting image in bronze of the positive outcomes we strive for.

There were 30 limited edition ‘Freedom Candles’ created and auctioned on eBay, with interest from celebrities including Yoko Ono, Peter Gabriel and Sting and candles reaching over $1,000 contributed towards Amnesty International’s work to defend and promote human rights.

Gerry Human, Chief Creative Officer for Ogilvy & Mather London said: “We are proud of our association with Amnesty International and I hope this award will in some small way help them highlight the amazing difference they are making in the world.”

OgilvyOne London has also landed another Gold Lion for its ‘Magic of Flying’ campaign within the Cyber category. This is the third consecutive day that the campaign has garnered awards, following its Direct Grand Prix and Gold Lions for Promo & Activation, Media and Outdoor categories.

The campaign raises awareness of the breadth of destinations offered by British Airways and the various new routes and flights the airline offers. The world’s first interactive digital billboards react to British Airways planes flying overhead and a little boy identifies passing planes, as each flight number and place of origin or destination is displayed on the screen.

The campaign had a global reach of over 350 million and was the most talked about piece of airline advertising in 2013.