Ogilvy Brazil Creates The Face of Corruption for Forbes

Artificial intelligence helps portray the face and personality of Mr. Ricky Brasil, a fictitious billionaire with over US$ 60 billion in assets 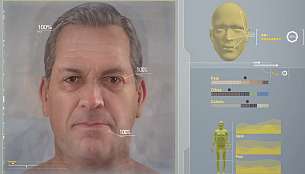 Corruption in Brazil is a multi-billion-dollar business. Although the accurate amount siphoned off public coffers escapes any assessment, officers with the ‘Operaçao Lava Jato’ (Operation Car Wash) officially estimate that resources lost to local bribery schemes amount to roughly US$ 61 billion a year.
If the sum ended up in the hands of a single individual, she would hold the eighth largest fortune in the world, according to Forbes World’s Billionaires List 2018.
But what would the identity of this Brazilian “billionaire” be? His bodily features? His opinions, consumer habits? Which market segment would be operate in? What would he think about the graft probing operations?
To raise public awareness around Brazil and join in the fight against corruption, magazine Forbes Brazil, ad agency Ogilvy Brazil, and technology companies Nexo and Notan have employed artificial intelligence to attempt to vividly depict the ‘face’ of Brazilian corruption. Along with the face itself and its features, our machine-learning device took the experiment one step further and pointed out personality traits associated with this person, called Mr. Ricky Brasil – a reference to Brazil’s billion-dollar corruption.
The project leading to Mr. Ricky Brasil began over ten months ago, with extensive research into the interviews and official depositions of some of the main convicts during operations Mensalão and Car Wash. With this content – local media reports, statements, interviews, books – being fed into the system, artificial intelligence could cross-check information and finally produce what is believed to be the closest portrayal of Mr. Ricky Brasil. The project is under curatorship of a journalist and a specialised writer.
“Forbes wants to take a stand against corruption and, to that effect, we thought of this campaign as a way not only to raise public awareness to the extent of the issue, but also to value honest business people, those who comply with their duties, pay taxes, and shun taxpayer’s money as a way to make a fortune. Someone who won’t let himself be lured into corruption practices”, says Antonio Camarotti, CEO of Forbes Brazil magazine. Since the 2017 Brazilian Billionaires edition, anyone appearing on the list under any investigation of corruption-related crimes, racketeering, fraudulent capital flight, and other serious bribery offences have been marked with a side note describing the nature of the investigation.
“The idea behind Mr. Ricky Brasil is to put Brazilian corruption figures into perspective. Forbes List is a major tool to help understand a billionaire’s net worth. Therefore, showing that corruption can generate so large a fortune is the best way the magazine has to fight the issue”, says Claudio Lima, Chief Creative Officer of Ogilvy Brazil.
view more - Creative