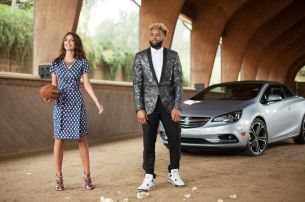 Buick’s first-ever Super Bowl ad will bring the brand’s award-winning 'Experience the New Buick' campaign to the biggest night in TV advertising. The campaign launched in 2014 and challenges consumers’ false perceptions of the brand.

The spot will be the first new Buick commercial to air in 2016, a year where the brand will launch three new products.

“With sales surpassing 1.2 million vehicles globally for the first time ever in 2015, the Buick brand has never been stronger,” said Duncan Aldred, vice president, Global Buick Sales, Service and Marketing. “Super Bowl 50 represents a perfect opportunity for us to showcase our newest vehicles in a spot that delivers a mix of light-hearted humor and star-power to a global audience of millions of consumers.”

“We wanted talent that represented attributes of the Buick brand and design philosophy,” Aldred said. “For Buick, Odell Beckham Jr. represents unique talent and commitment to excellence that mirrors Buick’s commitment to performance. Emily Ratajkowski brings style which aligns with the Cascada’s design and adventurous spirit.”

"While I would love to be on the field during the biggest game of the year, I'm excited to co-star in Buick's first Super Bowl ad," said Beckham Jr.

“I’m thrilled to be a part of Buick’s first ever Super Bowl ad.” said Ratajkowski. “I got to combine my love of sports, cars and fashion, while checking off a bucket list item – being in a Super Bowl commercial!”