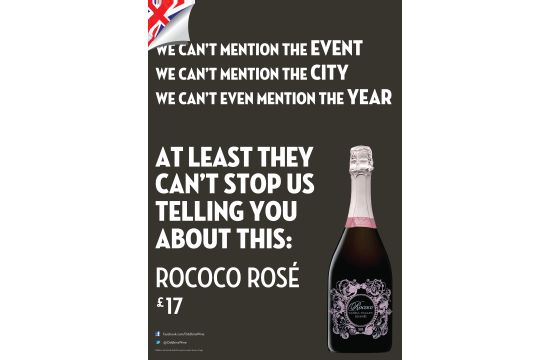 Wine merchant Oddbins has unleashed a campaign that obeys the letter if not the spirit of the Locog restrictions surrounding advertising and sponsorship for the London 2012 Olympic Games.

Oddbins, the high-street wine merchant, has offered a 30 per cent discount to anyone using products from rival brands to the official sponsors and has created a print campaign which criticizes the advertising restrictions which they describe as ‘labyrinthine’.

This marketing push is the brainchild of Oddbins Managing Director Ayo Akintola.

He said: “The London Olympics is a once-in-a-lifetime opportunity for the whole of the UK’s business community to come together to support our fantastic athletes and celebrate an awe-inspiring festival of sport.

“But thanks to LOCOG (London Organising Committee of the Olympic and Paralympic Games), any business without the tens of millions of pounds required to join the cabal of multinational brand partners for the Games are reduced to the status of beggars on the gilded streets of the Olympic movement.”

The LOCOG rules stipulate that no company should mention the Olympic Games, the city in which they are being held or even the year they are being staged.

In addition to window displays going up in all 35 branches, for the next three weeks anyone who comes into an Oddbins branch wearing Nike trainers and has in their pocket a set of Vauxhall car keys, an RBS MasterCard, an iPhone, a bill from British Gas and a receipt for a Pepsi bought at KFC will receive 30 per cent off their purchase.

He said: “We have taken steps to ensure our planned window displays do not flout any of these asinine rules, but we are doing this primarily to highlight the absurdity of the fact that the British people - who are paying for these games - are at the same time being subject to ridiculous rules. Even though our window designs will be within the rules, we would not be surprised if LOCOG goes loco.”