Ocean Launches Search for the World's Most Creative Digital OOH 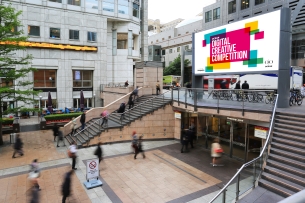 Ocean, the premium digital out of home (DOOH) media owner, has launched its annual competition to foster the best creative work in DOOH advertising, including full motion, subtle motion and interactivity.

For the sixth consecutive year, Ocean is inviting submissions from brands, the creative community and agencies, with the opportunity to win a share of a £450,000 prize pot and a chance for their work to be showcased on Ocean’s iconic DOOH locations and networks across the UK. Find out how to enter here.

This year there are two categories for the best interactive and creative concepts.  The finalists will go on to be judged by a panel of industry experts.

It is free to enter the competition, which is open until August 28. The winners are announced at a prestigious awards ceremony at the IMAX in London on October 8.

Ocean CEO Tim Bleakley said: “We have just witnessed one of last year’s winning campaigns for Women’s Aid generate global PR and go on to collect two distinguished Cannes Lions awards; a Gold for digital out of home and a silver in the Cyber category  – the ultimate prize and yet another defining moment for this competition which helped make this success possible.

“Ocean has invested in this competition to ensure that we draw a new wave of creative talent to the table, constantly evolving the opportunities presented to brands and ensuring we market and implement them to the highest possible quality.

“It is against this backdrop that we are celebrating the sixth anniversary of a competition that has educated and inspired the creative industry and helped deliver the success story of digital out of home so far by putting digital screens at the heart of creativity. This has always been the ethos behind Ocean, to stimulate understanding and exploitation of the medium and with it, growth and brand count.”

Ocean’s digital creative competition has created individual success stories for specific brands which have shown the world how DOOH can integrate with the latest in new technology:

· A live broadcast from the Caribbean, created five years ago by British Airways

· Feeding pigs apples in a farm in Buckinghamshire, in real time, via your mobile phone from Westfield, London