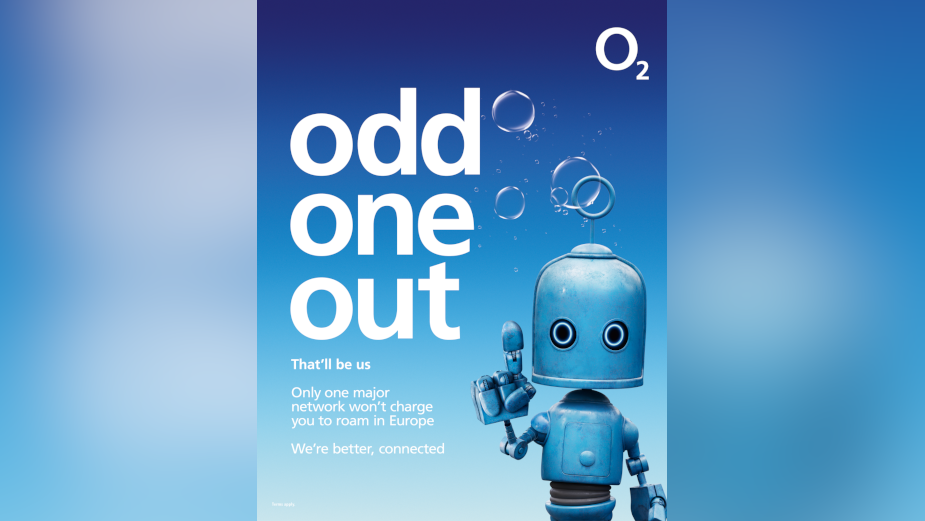 O2 and VCCP have today released ‘Odd One Out,’ a tactical advert to celebrate the news that alongside Virgin Mobile customers, O2 customers will not face roaming charges in Europe. Instead, customers will maintain inclusive roaming in Europe, using data, calls and texts just as they would in the UK. The move confirms Virgin Media O2 as the only major mobile network in the UK not to reintroduce roaming charges.

The creative by VCCP will run from today across press and social media and depicts Bubl, O2’s loyal and reliable blue robot, proudly holding up his hand to show that O2 is the only major network to offer the incredible package. Under the campaign strapline ‘Odd One Out,’ the creative confidently showcases that ‘Only one network won’t charge you to roam in Europe this year’ and that is O2.

Simon Valcarcel, marketing director at O2, Virgin Mobile & Virgin Media O2 said: ‘At O2 we’re committed to giving our customers only the best, most competitive service. We’re optimistic that 2022 will bring more opportunities to travel abroad and in this spirit we’re very proud to say that we’re the only major UK network not to reintroduce roaming charges.’

David Masterman, creative director at VCCP London added: ‘What better way to kick off 2022 than this tongue in cheek reactive campaign using Bubl, our helpful little blue robot. ‘Odd One Out’ perfectly personifies O2; industry leading, a tad cheeky, and most importantly, proof that it’s loyal customers are at the heart of everything we do.’

The news comes as the Government has announced changes to travel testing rules, with airlines and travel operators reporting a sudden bookings boom from Brits eager to get away. A recent survey carried out by Virgin Media O2 backed up this sentiment, showing that Brits have strong travel intentions in 2022. By this summer the majority (75%) of people surveyed expect to travel abroad – and a majority expect to do so more this year than they did in 2021.