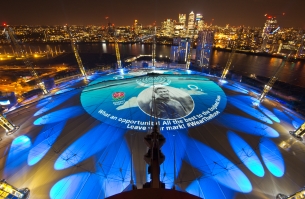 O2, proud partner of England Rugby has unveiled the world’s largest projection. For the first time ever, The O2 has been transformed into a spectacular canvas for 3-D projection mapping light shows, designed to inspire fans all over the world to tweet their messages of support and get behind the England Rugby team.

Ahead of the biggest tournament in English rugby history, million album selling soprano and England Rugby official singer Laura Wright, launched the projection with a stirring rendition of Jerusalem from the roof of the iconic venue. England Rugby’s leading lady was surrounded by a patriotic 3-D projection mapping light show, matched to each lyric and verse, culminating in the singer being engulfed by a giant red rose. The O2 comes alive like never before.

From 8pm on Tuesday 15th September O2 will be handing the show over to fans, who, in a world first, will be able to have their tweets of support displayed on the roof of The O2. Jonny Wilkinson, Victoria Pendleton, James Anderson and members of O2’s Rose Army were amongst the first people to have their tweets projected, and fans from across the world can tweet their messages of support for the England Rugby team using #WearTheRose. Over the next seven weeks thousands of tweets will appear on top of The O2, with those lucky enough to be displayed receiving an exclusive image and gif of their own personal message.

Visible from the Thames, from air and even from space, a total of 68 projectors and over 144 moving head light fixtures are attached to the interior and exterior of the masts on The O2 to make the projection even possible. The projectors and lights cover a surface area equivalent to ten rugby pitches and the entire show is synced with the LED screens that surround The O2 to create a full 360 experience.

Laura Wright has been one of the biggest selling classical artists this decade. She was the first mezzo soprano to perform at the Olympic Stadium and has enjoyed many performances at prestigious venues such as the Royal Albert Hall, Buckingham Palace and Westminster Abbey, but no performance until now has seen her elevated in the sky amidst 1.42 million lumens of light.

Laura Wright said: “Jerusalem is such a patriotic song that symbolises national pride, and singing it on top of The O2 as it wears the rose around me is like nothing else I’ve ever experienced. I will be supporting the team so I hope it encourages the whole of England to do the same.”

Stuart Lancaster, England Head Coach commented: “We are in a unique position to be playing on home soil and have the support of a nation behind the team. That support can be the difference and we are calling the entire English population to rally and get behind the team. We are ready and will do everything in our power to represent the shirt and nation with pride.”

Nina Bibby, Marketing and Consumer Director at O2 said: “This is the pinnacle of our 20-year partnership with the England Rugby and is the ultimate demonstration of O2’s support for the team. We’re calling on the entire country to show their support and now we are handing over the incredible opportunity for fans to tweet their messages on The O2 to make the team feel like giants and inspire them onto victory.”

The large scale light show which illuminated an area of over 10,000 square meters took 14,120 man hours to produce, with riggers climbing on average 2,800 feet per day.

The projection will last for the duration of the tournament and will illuminate The O2 each night from sunset to midnight. And each time the England Rugby team play, The O2 will also come alive and there will be more surprises throughout September and October.

To get involve fans can tweet their messages of support using #WearTheRose, for more information visit www.o2.co.uk/weartherose