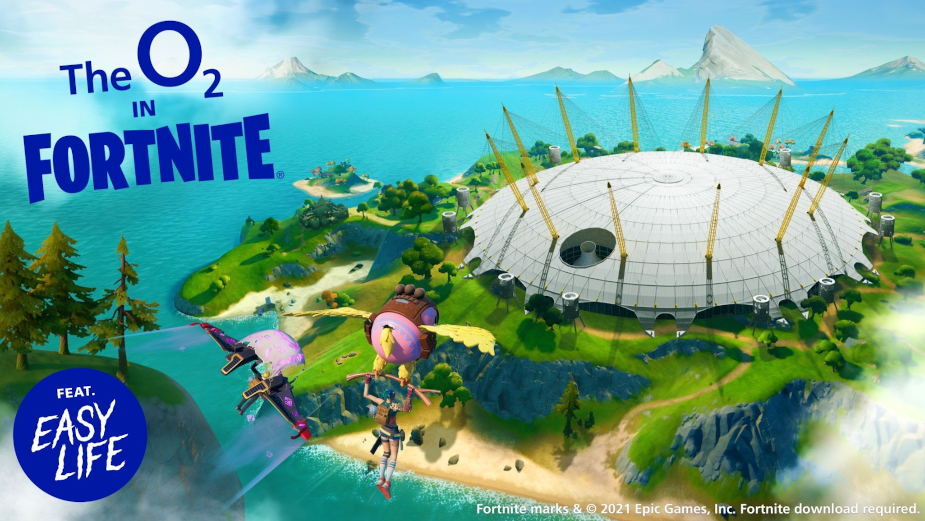 O2, working with Island Records and Epic Games, has today announced that London’s The O2 is now available to explore in the world’s biggest game Fortnite, within Fortnite Creative. Running for a week, the campaign will connect Fortnite’s global audience of millions with the world-renowned music venue. Inside Fortnite Creative, players will be able to enjoy an interactive musical experience alongside the chance to win exclusive rewards in the Priority app, including tickets to future easy life shows at O2 venues for O2 customers.

Accessible globally, the week-long activation marks the first time that the world’s most popular entertainment venue, The O2, has ever appeared in a video game. Another first for the campaign, includes a unique interactive musical experience by the UK’s top up-and-coming Leicester act, easy life, who will virtually perform tracks from their debut album ‘life’s a beach’. They are the first UK act to play within Fortnite Creative.

The in-game version of the iconic London landmark will be instantly recognisable inside Fortnite Creative, and once inside the virtual venue users will be able to engage in several exciting gameplay experiences, a vast new space packed with hidden rooms to explore, backstage areas and The O2 Blueroom, where they can complete challenges to unlock exclusive in-game rewards. 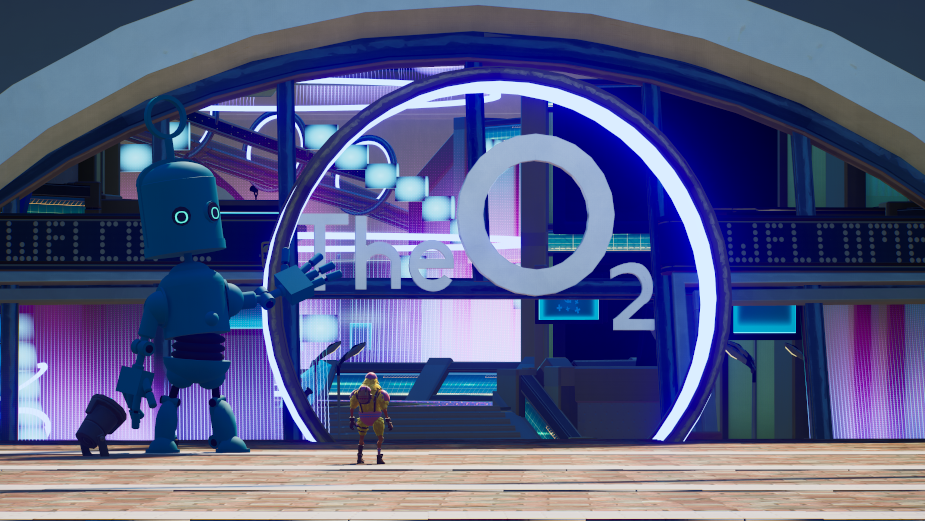 Within Fortnite Creative, the O2 x easy life partnership will provide players and music lovers with a range of unique and interactive experiences. Built with players in mind; not just a recreation of traditional live gigs, it is a full experience for users to interact with, unlock, and collect in-game items including a free exclusive ‘Squeezy life’ graffiti Spray. There is also a lobby track that players can unlock in-game only after attending the experience created by easy life and Fortnite that ties into the newly released Fortnite Season 7 Invasion. Bubl, O2's new blue robot and brand character, will feature as gigantic statues throughout The O2 in Fortnite Creative.

The performance starts Thursday, 24th June at 20:30 BST and will be an interactive show where players will be constantly on the move. There will be hoverboards and underwater cinemas and the band will play in the belly of a huge decaying whale. During the show, attendees will be transported to six unique areas, each inspired by a different track from ‘life’s a beach’, pulled straight from the imagination of easy life themselves. Fortnite’s global audience of millions will be able to access and enjoy the gig with friends until midnight, Sunday 27th. The full performance will be posted exclusively to easy life's YouTube channel from Monday, 28th June.

With much of easy life’s headline tour of O2 Academy and other UK venues this coming November already sold out, their whimsical headline performance at The O2 in Fortnite Creative will give their fans an early chance to experience the UK’s top breakout band in action.

Simon Valcarcel, head of brand and consumer marcomms at O2, said: “We couldn’t be prouder to work alongside both Island Records and Epic Games to bring such an incredible experience to O2 customers and music fans all over the world via Fortnite Creative. O2 has a rich heritage in music and we’re committed to providing music fans with unique experiences so it’s only fitting that we’re bringing the world’s most popular entertainment venue into the world’s biggest game. We know how much everyone – us included – has missed going to gigs so we’re excited to bring the UK’s hottest up-and-coming act to music fans globally through Fortnite Creative.”

VCCP associate creative directors, Ben Hopkins and Morten Legarth, added: “When it came to recreating The O2 in a virtual space there really was only one platform that made the most sense. Working with professional Fortnite creators -- KKSlider, DolphinDom, Hellraiser and Team Cre8 -- we set out to totally reimagine how shows work. We really couldn’t have done it without the trust of our client O2, the support of Epic Games and the shared vision of easy life, their production team and Island Records to help us create a seamless game and music performance experience for players.”

Fortnite Pro-builders, KKSlider, DolphinDom, Hellraiser and Team Cre8, created the entire experience in Fortnite Creative mode, building The O2 from scratch. “Music was always a passion along-side level design and we are absolutely thrilled to have been involved in a project that combines both,'' explained Wertandrew, Lead Community Creator at Team Cre8. "This is the first time that an experience features an iconic venue and interactive show, both built from the ground up by Fortnite creators for players and music fans all around the world to enjoy.”

The O2 London opened its doors in 2007, the result of a groundbreaking partnership between O2 and AEG, the world's leading sports and live entertainment company. Priority is exclusive to O2 customers and provides invite-only moments to help them do more of the things they love. From exclusive treats and experiences, to early access to the most sought-after tickets in entertainment.

Customers can download the Priority app via the app store, or by texting PRIORITY to 2020. For more information, search Priority on O2 or visit here.