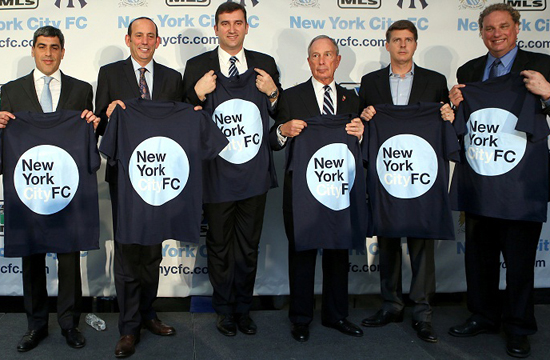 Droga5 today announced that it has been named the Agency of Record for New York City Football Club (NYCFC), the city’s first Major League Soccer team. NYCFC will kick off its first MLS season in 2015.

Speaking of the new partnership, NYCFC’s Chief Executive Officer Ferran Soriano said,
“In Droga5 we have found the ideal partner to help us establish and grow New York City Football Club. They share both our passion for soccer and our belief in innovation and creativity. While they have a global perspective, they are also locally rooted in New York, ensuring proper understanding and communication with our fans in this great city.  We are looking forward to working together.”

Owned by Manchester City Football Club and the New York Yankees, NYCFC was officially announced as MLS’s twentieth franchise in May 2013. The club is in the process of exploring a number of sites within the New York City area to build a permanent home.

“As an agency of people who both live for football and love New York, the branding and launch of our city’s first MLS team is a dream project,” said Jonny Bauer, Droga5’s Chief Strategy Officer. “We’re looking forward to working hand in hand with our NYCFC partners to give New York football fans something to get excited about, and all New Yorkers yet another source of pride.”

Effective immediately, Droga5 will be working closely with NYCFC as a consultant and partner in a number of targeted fan activation and engagement initiatives.

This is Droga5’s first partnership with a sports club.