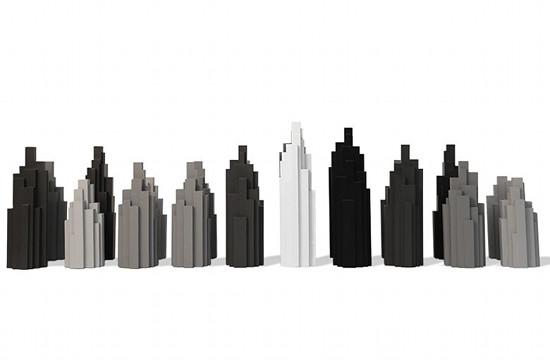 The five newly crafted trophies, inspired by New York’s classic Art Deco skyscrapers, will debut May 1st at the 2014 New York Show™ Gala. The five sizes and designs for the World’s Best Idea™, Grand Prize, First Prize, Second Prize, and Third Prize awards will be cast in aluminum and powder-coated in monochromatic colors and will range from 8 to12.5 inches. The variety of sizes and color variances will allow award-winners to create their own multi-dimensional version of the New York City skyline in their trophy case.

Jessica Walsh of Sagmeister & Walsh had this to say about the inspiration for the new trophy, “The new design for the New York Festivals trophies takes on a form inspired by Art Deco architecture, but contemporary in nature. Our goal was to create a beautiful yet unassuming form that would be displayed on the winner’s shelves. Over time as people collect their trophies they will create an abstract version of a New York City skyline.  Additionally, there is a small projector placed in the bottom of the trophy, so when the winners lifts their trophy up, their names will be revealed through an LED projector.”

“We created a trophy that we would love to receive ourselves,” added Stefan Sagmeister, “something that feels good when you lift it up, something that looks good as a grouping when you earn a few of them, and something that displays the winner's names in a new and innovative way—we've always hated the little glued on metal name plates.”

New York Festivals’ dynamic new trophy will immediately become a revered symbol of creative achievement that will pay tribute to the most celebrated advertising campaigns and their creators from around the globe, and continues New York Festivals® tradition, innovation, and 57-year commitment to honoring creative excellence and the World’s Best Advertising®.

“What’s conceptually brilliant about this trophy is that a single one represents a successful campaign,” said Michael O’Rourke, President, New York Festivals, “a collection of trophies represents a consistently strong body of work created by the agency.”

You can see these iconic trophies at the 2014 New York Show taking  place on May 1st and featuring creative panel discussions, keynote speakers, networking events, the awards ceremony, and an after-party to honor the winners. All New York Show events including the 2014 awards gala will be held at the New York Public Library’s Beaux-Arts landmark Stephen A. Schwarzman building located at 455 Fifth Avenue in New York City.

The 2014 competition entry deadline is January 31st, and all entries submitted after that date will be subject to a 15% Rush Fee. For more information on the 2014 competitions go to: Rules & Regulations or to enter go to Log In.