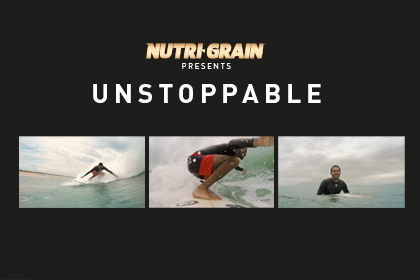 The campaign spans long and short form content, supported by TVCs, digital, online, PR and social executions. Reflecting the insight that teens want to live full lives -– but are increasingly held back by emotional, social or physical barriers that stop them following through -– the campaign’s core content was created by JWT and independent production company Finch.

Centred around ‘unstoppable’ individuals, each inspiring story showcases the Nutri-Grain brand values of courage, strength and determination, and dramatises a new brand belief that 'the only limits are those you place on yourself’.

John Broome, marketing director at Kellogg, explains: “This is an important piece of work for Kellogg. JWT have created a new strategic and creative platform, which delivers a major foray into branded content. Nutri-Grain is a power brand that needs to stay relevant to teens, so we wanted to inspire them by bringing to life powerful stories of individuals who have shown courage, strength and determination -– even in the face of adversity.”

The first ‘unstoppable’ hero in the content series is Brazilian Derek Rabelo, who despite being blind, has learnt to surf. The story of how Derek refused to be held back -– from dreaming as he listened to the waves, to the reality of surfing the legendary and extremely dangerous Pipeline break in Hawaii -– is the subject of the campaign launch executions in both long and short-form content pieces.

They also revealed Derek’s latest challenge as he takes up the intensely challenging sport of downhill skateboarding. More ‘unstoppable stories' are in production and will be live over the coming weeks.

JWT executive planning director Angela Morris says: “It’s a big responsibility to reposition an iconic brand and Nutri-Grain needed to reconnect with an audience that’s been pretty indifferent to cereal advertising. Moving to a belief based platform gives the brand reason and right to shift away from talking at them from the breakfast table and instead to have a more meaningful and relevant dialogue in the teen's world.”

The first content piece launches today, and a Supertease can be viewed here:

The campaign is supported by a range of pre-rolls, on pack activity and a TVC which goes live on Sunday, February 25. Social activity will also be undertaken by VML to drive awareness and generate discussion among teens using the hashtag #liveunstoppable.

Simon Langley, ECD of JWT Sydney says: “This is truly a big idea that gives the brand a new role in teens’ lives. Beyond making it relevant, it’s an idea that makes this a brand they will want to spend time with. In doing so, we have changed every element of the mix, from positioning, to pack, to new iconography around the Nutri-Grain bolt, and the whole communications model with the move into content publishing, all carefully honed to earn teen attention and engagement.”

To accompany the TV and digital launch, Nutri-Grain is also holding an event at Manly from 12-15 February as part of its sponsorship of the Australian Open of Surfing (AOS). As the official breakfast cereal of the AOS, Nutri-Grain will be showing Derek’s documentary at a pop-up cinema on Manly beach.

Derek is also meeting Aussie fans and taking to the water at Manly Beach today, in an expression session with other Nutri-Grain surfing ambassadors including Ellie-Jean Coffey, Holly Coffey, Jackson Coffey, Kyuss King and Alex Hayes. Sponsorship and event elements were created and executed by Mindshare and Liquid Ideas. Mindshare has also activated a broadcast sponsorship on MCN.

The campaign launch coincides with the release last week of a national study by Nutri-Grain in conjunction with ReachOut.com, which showed that Aussie teens are great at setting goals – they just have a lot on their plate and need some support and inspiration to achieve them. According to the findings, one in five Aussie teens (19 percent) said there’s nobody in their lives who inspired them and only 45 percent said they’re optimistic about their future.