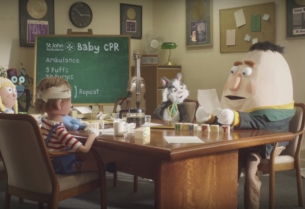 St John Ambulance has launched Nursery Rhymes Inc. - a campaign that teaches parents and the wider public how to help a baby who’s stopped breathing. New research shows that this is the first aid emergency parents are most worried about, yet only one in four know how to help. Nursery Rhymes Inc. teaches baby CPR in a short, clear and reassuring way to help parents remember what to do in an emergency.
Created by BBH London, with Media planning and buying by John Ayling and Associates, the campaign features everyone’s favourite nursery rhyme characters who’ve come together to create a memorable rhyme to explain the technique. Incy Wincy Spider, Humpty Dumpty, Jack & Jill, and the Cat & the Fiddle will be appearing in a TV ad struggling to write the rhyme – though they have more luck in the longer online version, which promises to make baby CPR truly unforgettable in just two minutes with a catchy song.
The campaign features the voices of comedians Adam Buxton and Tim Key and was shot by Becky Sloan & Joseph Pelling at Blinkink. Becky & Joe's fresh and playful style enjoys a cult following worldwide. Their immensely popular Internet series, 'Don't Hug Me I'm Scared', takes the conventions of children's television into new and nightmarish territory – though the approach for Nursery Rhymes Inc. has a warmer tone.
The campaign will launch with online previews to St John Ambulance supporters and social fans on the morning of 20 January. Later that day the ad will air in spots including Coronation Street and 24 Hours in A&E with a burst continuing for two weeks, then pulsing in February and mid-way through March, aimed at housewives with children under three.
Underpinning the TV is social advertising and PPC, the latter run by Reprise Digital. The in-house PR team will be leading on securing exclusives and celebrity social media support, along with a detailed roadmap of activity, and new online assets, such as colouring in competitions which will teach first aid, to maximise exposure for the campaign.
Nursery Rhymes Inc. follows on from last year’s award winning The Chokeables, which taught parents how to help a choking baby and is credited with saving the lives of 46 children since its launch. The video, which has had over 10 million views online, forms part of the charity’s vision that everyone should know first aid.
Ian Heartfield, Creative Director at BBH London, said: "Baby CPR is a difficult and scary thing to talk about.  No one wants to think about it, let alone learn it.  So we have to do everything we can to make people sit up and take notice. We hope that puppeteered nursery rhyme characters on the brink of a nervous breakdown will do the trick."
Emma Sheppard, Head of Brand and Communications at St John Ambulance, said: "The Chokeables taught us that parents were crying out for accessible first aid information. The task with baby CPR was challenging as it’s a more complicated technique than choking but we think we’ve cracked it with Nursery Rhymes Inc. The longer version embeds the knowledge further through a pretty catchy song, which we’re confident will make baby CPR unforgettable."
The characters of Nursery Rhymes Inc. explain the steps to saving a baby who’s unconscious and not breathing. These are:
1. Call 999/112 for an ambulance
If you’re on your own, you need to give one minute’s worth of CPR before you can call for help, taking your baby with you.
2. 5 puffs
Put your lips around their mouth and nose and blow steadily for up to one second. Give five puffs in total.
3. 30 pumps
Using two fingers in the centre of the chest, give 30 pumps at a rate of 100-120 per minute
4. Repeat 2 puffs and 30 pumps until help arrives
To celebrate the campaign, St John Ambulance is putting on special baby first aid courses for parents and anyone looking after children for just £25+VAT. To find your nearest course, or watch more first aid videos and advice, go to www.sja.org.uk/NurseryRhymesInc