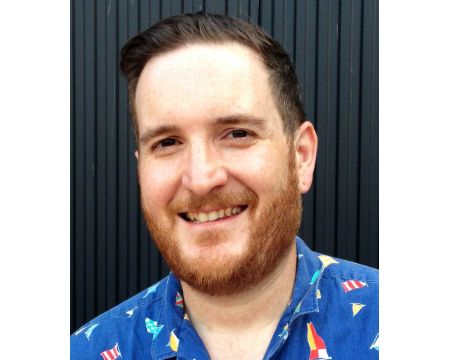 Award-winning, comedy Writer-Director Vinny Lopez has been welcomed to the team at NuContext Creative. Led by company Founder/Executive Creative Director Angela Guice, NuContext has signed Lopez to the company’s expanding Directorial roster for national representation in television promos, commercials/advertising, and branded content. You can view his reel here.

Having collaborated with such high-profile celebrities as Jenny McCarthy, Terence Howard and Jane Lynch, Lopez has fine-tuned the craft of working with celebrity talent. A long-standing collaboration with VH1 has resulted in Lopez writing and directing a series of television promos for “The Jenny McCarthy Show,” “The Soul Train Awards,” “Do Something Awards,” as well as “Larry the Cable Guy’s Christmas Spectacular,” all on VH1. Lopez also writes, directs and stars in the popular web series “Two Jasperjohns,” which has been touted by Splitsider, “New York Magazine,” and the New York TV Festival.

“Vinny is an incredibly unique talent,” says NuContext’s Angela Guice. “His writing and directing reflects his own brand of comedy, which is fun and irreverent. We are thrilled to have him join our Directorial roster. Our goal is to introduce Vinny and his work to our existing clients, who we know will love him, as well as introduce him to new clients who have not yet had the opportunity to work with him. Vinny’s collaborations with celebrity talent in particular is really impressive, given the high-profile celebrities that he has worked with already in his young career.”

“I met with NuContext by Bryant Park. It was a breezy day. I wore a cheetah shirt, they gave me cucumber water, we talked about weirdo comedy and they just seemed to get me. It was clear that they really understand the landscape in the industry now,” adds Lopez. “I have a certain voice and sensibility, and I knew immediately that they really got it. They made me feel really comfortable, and I’m looking forward to partnering with them on future projects.”