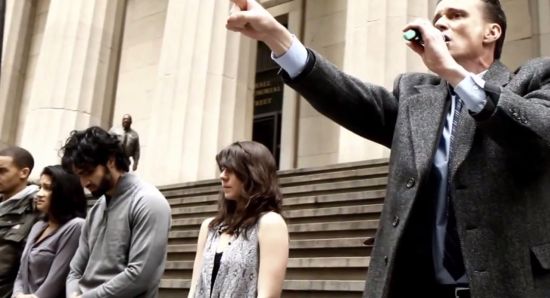 We don’t give it much thought, but there are over 27 million human beings who are currently slaves. That’s right: slaves.  To draw much-needed attention to this repugnant practice, the Freedom For All Foundation recently created a heartrending PSA campaign and staged “Stop The Nightmare,” a series of three uncomfortably authentic human auctions, live in New York City. Eager to support this important cause, visual studio Ntropic jumped at the chance to edit film footage from the auctions, which were held on Wall Street, Times Square and Washington Square Park on March 5.

Guided by the editing expertise of Ntropic Creative Director Steve Zourntos, the film of the Wall Street auction provides a powerful and emotional look at the auctions, together with the stunned, often outraged reactions of onlookers.

“This was a challenging project for a deeply important and urgent cause,” says Director Kim Dempster, who wrote and directed the “Stop The Nightmare” auctions. “I consider this to be the most important project I have ever worked on. Ntropic and Steve jumped into the edit with great vigor and tenacity, and have created an absolutely gut-wrenching film. It is just so real, just watching still reduces me to tears. Ntropic did an amazing job, and we couldn’t have done it without their help.”

“I was excited to be part of this powerful project,” says Zourntos. “I found myself in this surreal and disturbing world that is a terrifying reality for over 27 million people. It was a project that put us through an emotional roller coaster of disbelief, shock, sorrow and outrage. We were honored just to be part of it.”

“We always appreciate the opportunity to work with people who have the ideas and the will to make the world a better place,” says Tom Wright, Managing Director at Ntropic. “We create things here that take a lot of training and instinct to do well. Working on ‘Stop The Nightmare’ gave us the chance to bring some of our skills to help spread the word about an urgent issue, and we’re truly glad to have had the chance to do that.”