Donated by Silvercast with Wunderman Thompson, the billboard reminds people of what Australian firefighters are facing during the bushfires 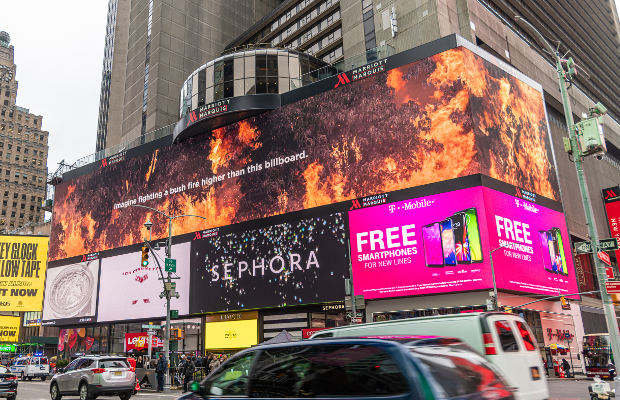 Donated by Silvercast, the 77-foot ‘Godzilla’ billboard is located at the third most instagrammed location in the world and is perfectly positioned to send a message of thanks to all the firefighters and those who support them around the world.

The 15-second installation transforms Times Square’s usual bright lights into a to-scale fire front. Engulfing in flames, the 20 metre-high digital billboard reveals the words: “Imagine fighting a bush fire higher than this billboard. Thank you to the brave Australian and US firefighters defending Australia. And to the world for all your support.”

Anthony Clark, director corporate communications said: “We’ve seen incredible support from all areas – from individuals, big corporations, our overseas firefighting partners and the community, so when we were offered this free ad space we thought it was a chance to return the favour and say ‘thanks’. The support has been amazing – it’s a small sign of gratitude on a big scale.”

Simon Langley, Wunderman Thompson’s national chief creative officer, said; “With Australia having experienced one of the worst fire seasons in history, there has never been a more important time for us to recognise our firefighters, both locally and internationally, who have bravely battled the bush fires to keep our country and people safe. It has been a privilege to work alongside NSW Rural Fire Service and Silvercast to create the global tribute our firefighters deserve.”