Directed by CZAR Amsterdam's director, Willem Gerritsen, this love story is aimed to evoke a feeling of freedom by the viewers 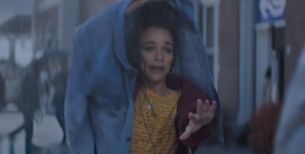 The film kicks off with a classic love story moment, but with a twist: in the pouring rain, a girl bumps into another girl while hurrying to make her train. Coincidentally she ends up in the same carriage as the other girl and she’s intrigued by her cool attitude and look. She then keeps running into her during her travels and when they both end up on a sunny terrace and finally meet, their affection turns out to be reciprocal, as love is clearly in the air.

Ending the film with the quote ‘Taste the Freedom’ seems to have a double meaning as it reflects both the freedom train travel gives you, as well as the freedom being able to choose any partner. Topping it all off with Aretha Franklin’s ‘Natural Woman’ the NS really seems to celebrate gay love as something both natural and beautiful.

The commercial brief was to highlight NS’ established position as a human and customer-centric company and emphasise the easiness and freedom train travel provides. When the heroin receives a message from friends that the sun is out, she decides to change her itinerary and the fly and head for the Rotterdam city.

CZAR Director, Gerritsen said: “Even though the story has a classic love story structure, I wanted to tell the story subtlety and small, so that you wouldn’t immediately know what’s going on between the two women. The character of the other girl is cooler, more confident and therefore aspirational to our main character. So maybe she is just intrigued by her? Only at the very end you know that it was indeed affectionate love all along and that the ‘cool’ girl is actually pretty warm and sweet.”