Now You Can Pay for Movies Online with Grolsch Beer 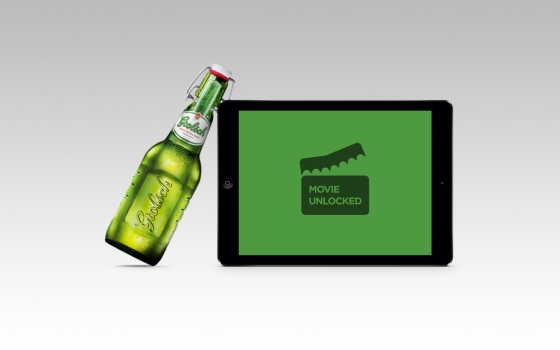 Ever tried paying to watch a movie using beer?  Thought not, but now you can…

App developers, Heads and Hands, have created ‘Movie Unlocker,’ which utilises the latest Bluetooth beacon technology to allow users to unlock movies online with the swipe of a bottle.

Aleksandr Semenov, CEO, Heads and Hands, says:  “We were aware of a current campaign being carried out in Russia by Grolsch, that allows consumers to enter promotional codes found on its bottles in to its partners websites.  This enables people to access a movie for free.  We liked this idea, but thought we could make the process a whole lot easier.   So, we developed this new ‘one-touch’ technology for the bottles in order to facilitate the transaction in a single step.”

Using radio signals, the beer bottle and the device it is brought in to close proximity with, are able to identify one another.  The beer bottle transmits a signal from the beacon located under the bottle top to the  appliance you wish to watch the movie on.  In order to prevent a premature activation when the bottle is capped, a special sticker blocks the radio frequency from being identified by the device.

When the bottle is opened, the beacon is activated and sends a signal to a server with a previously registered serial number.  If there is a match between this and a number in the database, the server confirms a successful connection. This verification process then allows a user to unlock their chosen movie.

The St Petersburg technology company’s product will be compatible with any device equipped with next-generation Bluetooth beacon connectivity.

Semenov, Heads and Hands, concludes:  “You will never need a credit card to pay for a movie again.  It’s so amazingly simple, I still can’t believe I’ve done it.  Who knows, maybe we’ll target the pizza market next with this technology!”