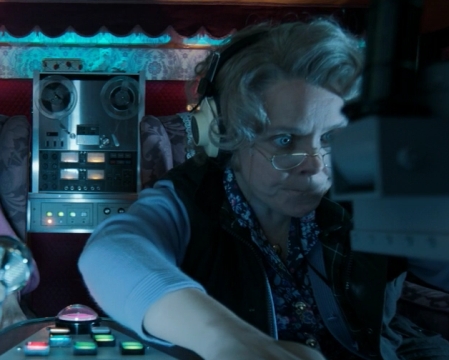 Yorkshire puddings are only present in 20% of roast dinners. Aunt Bessie’s, owned by The William Jackson Food Group with a brand value of £200m, are on a mission to change this.

As we consume more than twice as many roast chicken dinners as we do roast beef dinners, VCCP has created a new spot to encourage people to “Upgrade [their] roast chicken with Aunt Bessie’s Yorkshires.” The spot, which launched during X Factor on Saturday 11 October on ITV, features everyone’s favourite nosey grannies, Mabel and Margaret.

The spot opens with Mabel and Margaret sitting in an upgraded, high tech spy mobile – a conspicuously bright purple and pink van.

Surrounded by flashing lights and beeping buttons, Margaret warns Mabel not to touch the pink button.

But her warning goes unheeded as, through a window into a normal suburban home, the grannies notice a mother serving her family roast chicken – with Yorkshires! Like Margaret and Mabel’s upgraded van, this sensible mother has upgraded her roast dinner. In her amazement, Mabel thoughtlessly slams her hand on the pink buttons, and the grannies are flung through the roof of the van by their ejector seats, plopping onto the lawn outside the family’s front window.

Alongside the advert, the TV campaign will feature new idents for ITV game show The Chase. The idents which see Mabel and Margaret using updated equipment to spy on the family including a china cat spy-cam and a nodding dog radar, launch on Thursday 16th October, and will run on Thursdays, Fridays and Saturdays.