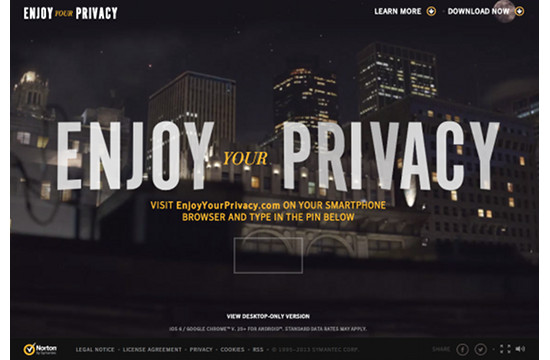 Mobile devices have become virtual windows into our lives, yet surprisingly two-thirds of mobile devices are left unprotected and nearly two-thirds of adults use unsecured Wifi networks to access their personal data. This leaves people super susceptible to hackers, eavesdropping software and worse.

Norton, Leo Burnett and Jam3 have created an EnjoyYourPrivacy experience, to help visitors learn about what can become of lost, stolen or hacked devices. The project putting the user in the shoes of the would-be 'hacker' who stumbles upon an unprotected device.

The launch of EnjoyYourPrivacy.com was a massive exercise in collaboration.  Leo Burnett tapped Toronto-based digital production company, Jam3, along with production company Smuggler and Director, Mark Malloy, and VFX company Method, who all worked together with the agency to concept and build the story, ultimately shooting the scenes and footage in a way that it could come to life seamlessly through the digital experience.

The entire city environment was created in CG with live action footage added to each interior to ensure everything matched up with the user's virtual camera experience.  Jam3 used WebSockets to meld the highly interactive narrative into a situation that could be controlled by the user's mobile phone via desktop.  Jam3 built the site entirely in HTML5 using their proprietary Copper framework, stitching together over 70 videos to allow for seamless movement throughout the building and the stories unfolding within.  Users simply sync their mobile device to the desktop and begin interacting with seven fictitious characters who all have secrets for the user to uncover. Through EnjoyYourPrivacy.com, users have the ability to scroll through the unprotected mobile user's photos, text messages, personal emails, bank statements and much more.