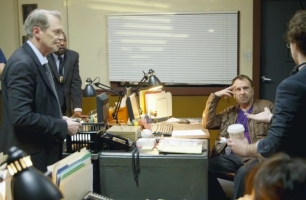 NY-based Northern Lights editor Glenn Conte has once again teamed up with SNL alum and comedian Colin Quinn on the Web series that boldly turns the police drama genre on its head for Season 2 and 3 of “Cop Show.” The satirical Web series appears on L/Studio, the Lexus-owned digital content channel, which brought on Full Court Press to program and develop content. Conte edited the series for the second season and third season, which takes a behind-the-scenes look into the production of a crime drama, with a new slate of A-list guest stars including Chris Rock, Jerry Seinfeld, Steve Buscemi, Seth Meyers, Irina Shayk, Jim Norton and Steve Guttenberg. The series was created and written by Quinn, is produced and directed by J.D. Amato (“The Chris Gethard Show”) and is executive produced by Morris S. Levy of MEGA Films (producer of the upcoming “Undefeated: The Rocky Marciano Story” starring Jeremy Renner) AGI Entertainment’s Brian Stern, and Full Court Press’s Lisa Eisenpresser (“Hudson Valley Ballers,” “Summer Forever”). Season 2 launched on February 2nd, with all 9 episodes available for streaming simultaneously.

View the 'Cop Show' Season 2 teaser below and click here to watch the entire season on L/Studio.

After a successful Season 1 of the comedic Web series, Conte was eager to collaborate with the creative team on a new season mixing the same distinct dry sensibility with an amplified scope of production value. He worked closely with Quinn and Amato to make each of the under-10-minute episodes as tight and poignant as possible. “Colin’s writing and creativity continue to deliver this season, leaving me with a lot of footage to work with,” he notes. “The big challenge is to hone in on the funniest moments and keep the audience guessing with the alternating storytelling techniques. Between the behind-the-scenes moments, the actual scenes and the interviews, we try to maintain a loose format that keeps the humor fresh.”

“Northern Light’s private club atmosphere is relaxed and cool and they give you free candy and oranges,” notes Quinn.

“Any other editor would have quit Cop Show. The amount of footage we shoot and the ambition of our project is overwhelming from a post production perspective,” adds Amato. “Editing is such a huge part of Cop Show. The narrative of the show exists in four levels of reality and each one has its own comedic tone, look, and pace. The fact that Glenn and Northern Lights support such an insane ambition speaks volumes.”