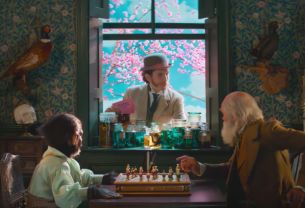 Today, Stella Artois has unveiled its bold new 360° Wimbledon campaign. To mark its return as Official Beer of The Championships Wimbledon, Stella Artois has developed a campaign inspired by the personal journeys and modest beginnings of those behind the origins of the world renowned brands – from the first ever Wimbledon champion to Sebastian Artois himself.

The second chapter in the “Be Legacy” drive, the campaign kicks off with a TV ad directed by Andreas Nilsson, a director noted for his cinematic style which is demonstrated in the TV ad of the humble beginnings of Wimbledon and Stella Artois. Taking us back to Victorian London at a time when no one had ever heard of them, the advert playfully shows us that even the biggest legacies have to start somewhere.

Inspired by classic Technicolor movies like Gone with the Wind, the film is set in Victorian London and tells the story of a young man who is trying to sell tickets to a brand new event – which as it turns out, is to the very first Wimbledon. The trouble is, it’s so new, no one has even heard of it, let alone wants a ticket. After being rebuffed by all kinds of colourful Victorian characters, he’s ready to give up.  However, his spirits are lifted by an encounter with a bar owner who offers him a taste of an unknown beer from Belgium (an early export from the Artois Breweries). He takes comfort in knowing he’s not the only one trying to turn an unknown name into a lasting legacy.

The fully integrated campaign created by Mother also features outdoor and digital, as well as a fully immersive theatre experience called ‘The Time Portal,’ that will take place over five days in London. Created in collaboration with Olivier Nominated theatre troupe Les Enfants Terribles and Framestore, the creative studio behind Oscar®-winning movie Gravity, the experience will transport audiences back to Victorian London in search of the first Wimbledon.

All activations will bring to life the personal journeys that both Stella Artois and Wimbledon have embarked on, from their humble beginnings to the legacies they are today, with the aim of inspiring consumers to leave their own mark on the world.

“We are thrilled to mark our return as The Official Beer of The Championships Wimbledon with this hugely exciting new campaign,” said Rowan Chidgey, Senior Brand Manager, Stella Artois. “This legendary tennis tournament and our best-selling Belgian beer have shared similar journeys as once unknowns who have distinguished themselves over time. We hope that their stories will help inspire our audience to get out there and make their mark on the world.”