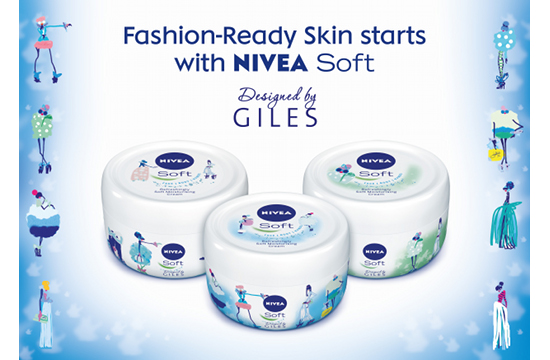 NIVEA Soft is taking to the streets of London during London Fashion Week (13-17 September) with a sampling and social media campaign led by integrated marketing agency Space.

As lead creative agency for NIVEA Soft, Space has developed a pan European campaign that will be delivered across multiple markets within the NOE region.

To celebrate the launch of its new limited edition range of NIVEA Soft moisturiser pots designed by British fashion designer Giles Deacon, the brand is encouraging people to share their fashion looks or ‘Outfit Of The Day’ (OOTD) on Twitter and Instagram and tagging the photos with both hashtags #OOTD #NIVEASOFT.

From all the #OOTD #NIVEASOFT photos that are uploaded, 15 will be selected and shortlisted, and opened up to public vote. The #OOTD photo that receives the highest number of votes will win a personal style consultation with Giles Deacon.

During London Fashion Week, NIVEA Soft hit squads will be roaming the streets of London to hand out samples of NIVEA Soft and look for the best OOTD. A paparazzi photographer will accompany the NIVEA Soft hit squads, engaging with passersby and taking photos of their outfits to be shared on NIVEA’s Facebook page.

There are three pots in the limited edition NIVEA Soft range designed by Giles Deacon, which each feature his famous signature illustrations and depict a different scene from the fashion world on each of the three pot designs:  Backstage, Catwalk and Photoshoot. The pots will be available to buy from major grocers as well as Boots and Superdrug, with the Backstage pot exclusively stocked by Tesco.

Sophie Rock, brand manager for body care at NIVEA said: “#OOTD is an amazing phenomenon which has developed within the fashion blogging world and captured the imagination of consumers. It’s the perfect fit for NIVEA Soft in 2013 – it’s relevant, imaginative and trending in the fashion community. The brand has a history of partnering with notable figures and this collaboration with Giles Deacon is a fantastic opportunity to bring home the message that ‘Fashion-Ready skin starts with NIVEA Soft’.”

Jim Carless, head of client services at Space said: “Our brief was to firmly position NIVEA Soft in the fashion territory and encourage people to trial the product. We saw London Fashion Week as the perfect environment to do this.  Social media and photo sharing is central to our younger consumers’ lifestyle and is an integral part of London Fashion Week.

“#OOTD has become a fashion industry movement that provides inspiration and imagination on style. We wanted to take that a step further by inviting NIVEA Soft consumers to engage with the brand and in return, give one person a money-can’t-buy chance to spend time with a leader in that industry, so the valuable collaboration with Giles Deacon offers a great opportunity for the consumer and brand alike.”