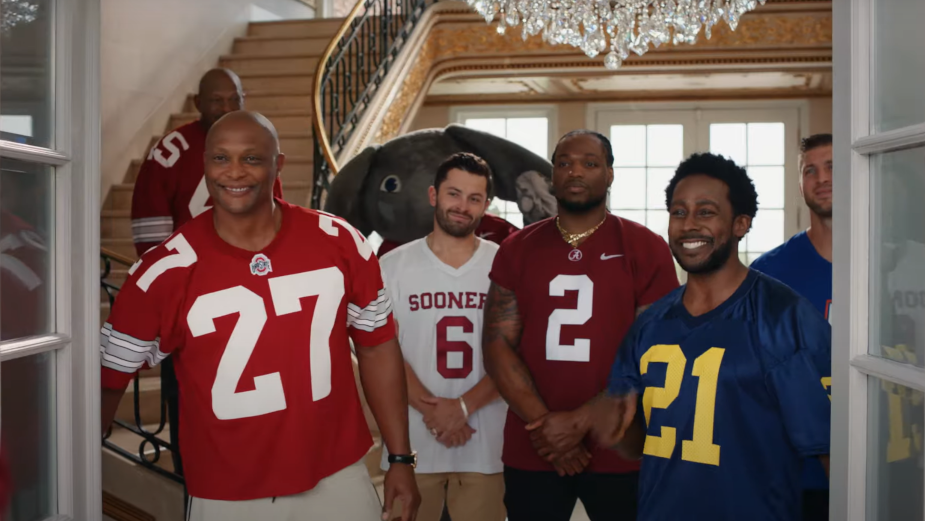 “Heisman House is back with some of the most beloved players in what we feel is our best line up of fan-engaging spots yet,” said Allyson Witherspoon, vice president and US  chief marketing officer, Nissan. “We’re connecting with sports fans whose appreciation for the Heisman House serves as the inspiration for the latest ads.”

With its agency partner, TBWA\Chiat\Day New York, Nissan scoured a decade’s worth of Twitter posts referencing 'Heisman House' and selected the most creative and  humorous among them to serve as a basis for its latest campaign. The result: 10 storylines that would go on to become spots in the campaign.

The launch spot for the campaign is titled 'How We Heisman.' In it, long timers show Heisman House rookie Devonta Smith the ropes. Archie Griffin shows him proper Heisman trophy-shining technique. Desmond Howard demonstrates the Heisman pose, and Baker Mayfield tricks Smith into ordering 40 all-new 2022 Nissan Pathfinders using  the Nissan@Home service. The inspiration for the spot, in part, came from a tweet by Eric Dietze of Brookfield, Wisconsin, that reads, “As part of his initiation, @DeVontaSmith_6 (’20) has to clean all of the Heisman trophies. By ancient laws of the Heismans, he needs to finish before sunset, or else.”

The all-new 2022 Nissan Frontier, with an all-new powerful, rugged and distinct design, is front and centre in a spot titled “Good Hands.” Desmond Howard ponders how Devonta Smith is able to make such an amazing catch when he tosses him a water bottle for a ride in his all-new Frontier. The spot was in response to a tweet from  Kennedy Plieth of Warren, Michigan, who writes, “Desmond and Devonta MUST have a Heisman House commercial together.”

Another tweet that served as inspiration for a campaign spot came from Mitchell Allen of  Houston, Texas. He writes, “Who would win a spike ball tournament in the  #heismanhouse? My money is on @K1.” The resulting spot titled “Spike It” features Bo Jackson, Desmond Howard and Baker Mayfield enjoying a friendly game of Spike Ball.  Barry Sanders joins them, but there’s one problem – he has never spiked a ball before.

The Heisman House spots will run on TV across ESPN, ABC, ESPN2, FOX, FS1, CBS, CBS  Sports Network and during Monday Night Football on ESPN. More content will be  available on Nissan’s and ESPN’s digital channels, including a 3D experience at the Virtual Heisman House as well as behind-the-scenes footage and bloopers from the  shoot.

Viewers can hear from a few of the fans behind the inspirational tweets during an  interview with ESPN’s Christine Williamson that will air in early September on College  Football Countdown. Snippets of those interviews will also air on ESPN’s College Football  Live each week when a new spot launches.

The tour brings with it interactive games and events and will include appearances by Clinton Yates of The Undefeated.

“This is the first time that the tour will be visiting Hampton University and TSU,” said Witherspoon. “We’re looking forward to engaging with students there and bringing the  Heisman House experience to new audiences.”

Through its partnership with ESPN, Nissan will sponsor an HBCU segment on First Take during which analysts will preview an HBCU football matchup and highlight the Heisman  House Tour stops at Hampton and TSU. Nissan will also have a prominent presence on TheUndefeated.com, the digital hub for ESPN’s multimedia content unit that explores the  intersections of race, sports and culture.

During the Nissan Heisman House campaign shoot, ESPN also sat down with Heisman Trophy winner and TSU’s new head coach, Eddie George, to talk about HBCUs and  football. The resulting interview will be shared on The Undefeated’s social media handles on October 15th.