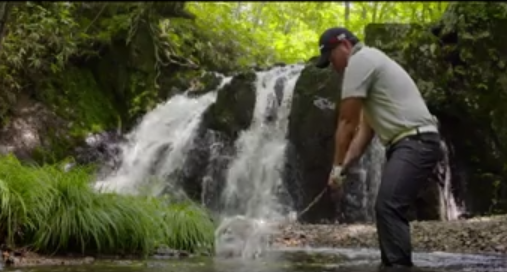 Playing golf in the most unlikely, extreme locations imaginable – such as sand dunes, off sheer cliffs, waterfalls, in deep forests, amongst ancient ruins and in underground caves – is not for everyone. Despite its nature, Nissan’s X-TREME GOLF CUP competition received an overwhelming response with over 300 applications from both professional and amateur athletes from all over Japan.

The X-TREME GOLF CUP featured 18 holes of the most difficult golf ever played, over 1,934 kilometres on a 6,013-yard course. It emerged as a whole new sport, complete with official rules and specially customized courses.

After careful screenings, three of the toughest individuals – who excel in both golf and other outdoor sports – were selected to play off for the championship title with the Nissan X-TRAIL HYBRID offered as the grand prize.

The story of their adventure attracted national attention.

Throughout the gruelling 96-hour challenge, the Nissan X-TRAIL HYBRID roared into action, going where no conventional golf card could go.