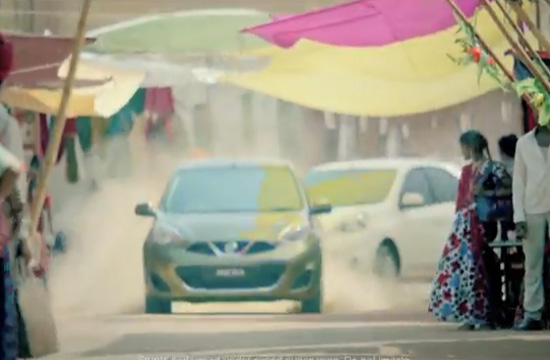 Nissan has re-launched the Micra hatchback with a robust and dynamic facelift packed with driver-friendly features.

The new Micra now also offers the convenience of a Continuously Variable Transmission (CVT) gearbox. It’s a technology that is a first in the segment for better fuel efficiency and a smooth city driving experience.

CVT is superior to normal automatic transmissions for both drivability as well as fuel efficiency. Against traditional automatics, which are less fuel-efficient than manual transmissions, Nissan’s CVT provides a better fuel efficiency. The external revamp includes LED taillights, (offered in a hatchback for the first time), reverse parking camera, Piano Black finish console and Bluetooth connectivity, making the Nissan Micra the best buy in the B and B+ segment.

The campaign, called ‘Tag on Wheels’, was conceptualized keeping the Micra’s capabilities in mind. Set against the picturesque backdrop of Jaisalmer, the commercial features four cars playing a game of tag. The game takes the viewer through the winding lanes of the fort-city, palaces and ruins establishing the Nissan Micra as a tough car and introduces the key features of the car in a very non-intrusive yet effective manner. Shot over three days, one of the country’s top car stunt drivers was consulted to make sure the car’s true capabilities were captured.

“The significant exterior and interior changes to Micra are based on the customer’s desire for a more aggressive and highly maneuverable hatchback with state of art features for today’s driving needs combined with infotainment necessities,” said Nitish Tipnis, Director Sales and Marketing at Hover Automotive India (NSC Nissan India). “The ‘Play Hard’ campaign accentuates the new Micra’s sporty and macho stance while demonstrating the spacious interiors and features. The tone of the new TV Commercial raises the bar for customers in the hatchback segment who aspire for the best. Combined with a media mix of print, digital, TV and others, the Micra along with the Micra Active starting at a game-changing price of Rs 3.5 lakh will broad base the product target across the entire hatchback segment.”

Parixit Bhattacharya, Chief Creative Officer at TBWA\India added, “With a bolder grille as its new face and loaded with features including the game-changing CVT, the Nissan Micra deserved a commercial where the car was the real star. Four cars playing a game of tag allowed us to unveil the many facets of the car while sticking to the story. The premise also helps in establishing the new Micra as the mean performer that it truly is. We hope the commercial will motivate people to reassess the car and inspire them to play hard."

Shiv Sethuraman, Group CEO of TBWA\India said, “There was an inherent need for disruptive thinking and work to attract consumer eyeballs. With the intention of creating a new space for the Nissan Micra, the commercial highlights the outstanding features of the car through an enjoyable narrative.”