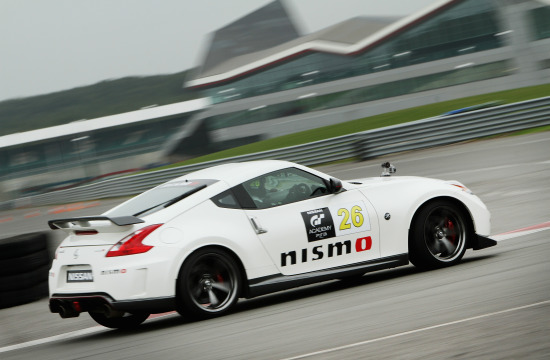 Nissan GT Academy returns to U.S. television for its third season, determining once again which of America’s best racers from PlayStation®3 driving simulator Gran Turismo®6 have what it takes to make the jump from the couch to the cockpit to become a professional racing driver.

Season 3, Episode 1 of Nissan GT Academy debuts on SPIKE TV at 10:30pm ET/9:30pm CT on Monday, November 11. Five 30-minute episodes will air each Monday, leading up to a one-hour season finale on December 16, in which a winner will be crowned. Episodes will also air with a one-week delay on MTV2 starting November 18, and every episode will be available on the Nissan YouTube channel the Thursday after its original air date.

“We are excited to announce the third season of the GT Academy show and to further our relationship with PlayStation and SPIKE TV after last year’s success. At Nissan, performance and excitement is at the heart of our brand, and the third season will deliver both for our audience.  We are confident the Season 3 winner will demonstrate speed, strength and soul: all qualities of a Nissan Motorsports Athlete that will translate into success on the track for Nissan,” said Jon Brancheau, vice president, Marketing, Nissan North America.

The show, a race from virtual to reality, provides the top Gran Turismo drivers with a chance to become a professional racing driver for Nissan.  Over 400,000 racing enthusiasts registered for the competition, with the top 32 contenders making it to the National Finals in New York City. This year, in a change from the previous two seasons, the finals saw the contestants get whittled down to just 12 finalists after a series of virtual, media and real-life driving challenges.

Over the course of the six-part series, the 12 finalists are put through the paces on the track at Silverstone in the U.K. to determine one Nissan GT Academy winner. The competition includes a variety of physical, psychological and athletic challenges in addition to extensive track time in Nissan 370Z NISMOs, Nissan GT-Rs and the Nissan JUKE NISMO.

A Nissan GT Academy First Person online experience was created to provide a fun interactive element for fans of the show. Using video and motion tracking, users get to experience the action firsthand and feel what it’s like to be behind the wheel of a racecar. Videos are accessible via web browser, tablet or phone, and once completed, users can share their performance with friends on Facebook.

The GT Academy program is currently running in six regions: Europe, Russia, Germany, South Africa, the Middle East and the United States. Winners from the program have gone on to compete professionally in racing competitions around the world. Inaugural GT Academy Europe winner Lucas Ordonez won the Pro-Am division championship of this year’s Blancpain Endurance Series in a Nissan GT-R, while numerous GT Academy winners won pole positions and finished on the podium at a variety of races around the world in 2013.

The GT Academy program was developed in partnership with TBWA\Chiat\Day Los Angeles, OMD and RadicalMedia. The TV series is directed by Jeff Zwart. Critical Mass is responsible for the First Person online experience.