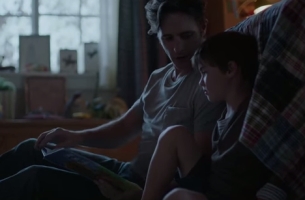 In the world of automotive advertising, Super Bowl Sunday is the one day of the year where pretty much anything goes. Nissan exemplified that strategy in its return to the Super Bowl ad ranks for the first time since 1997, scoring big today with a dramatic 90-second commercial titled “With Dad.” The commercial combined a touching storyline with the debut of future Nissan race and production vehicles.

The story, which follows an up-and-coming race driver through his journey to the highest levels of motorsports competition, uses a narrative soundtrack provided by Harry Chapin’s iconic “Cat’s In the Cradle.” It depicts the struggles of a father and mother to balance work and family while they raise their son. In the end, the cycle, so well known in Chapin’s song, is broken.

“The spot depicts a journey that moms, dads and children face in trying to make family a priority while striving to balance work demands. Like many women and men in America, our dad cherishes the time he spends with his family, but the requirements of his job continually call him away,” said Fred Diaz, senior vice president, Nissan Sales & Marketing and Operations U.S., Nissan North America. “But as we see, both parents share equally in the courage, hard work and sacrifice required to keep the family strong as they raise their son.”

In connection with the “With Dad” commercial Nissan will donate $1 million to help people build a better future for themselves and their families through a contribution in support of Habitat for Humanity and Wounded Warrior Project (WWP).

“Beyond just the work-life balance depicted in the ad, many families all over the country are struggling to find affordable housing or are in need of assistance re-assimilating into family life after military service,” said Diaz. “We’re pleased to be making this donation, along with building awareness and exposure for the organizations’ important causes.”

The “With Dad” commercial, which debuted during the second quarter of today’s game, will not be shown again on broadcast TV.

As for the images of fast cars shown in the spot – along with the historical Nissan racing footage used as a backdrop – they, too, were out of the ordinary. Shown for the first time anywhere was the new Nissan GT-R LM NISMO, which will contest the LM P1 class of the FIA World Endurance Championship, the highest category in world sports car racing. The highly innovative front-engined, front-wheel drive vehicle, with its aerodynamic bodywork, is powered by a 3.0-liter V6 twin-turbo gasoline engine and a kinetic energy recovery system. It is a combination expected to produce around 1,250 horsepower under race conditions. Details on the upcoming Nissan sports sedan, which appears briefly in the spot, will be announced in the near future.

“We’ve packed a lot of story and surprises into one beautifully executed commercial,” said Diaz. “After a long absence, it was not only great to be back in the big game, but to be back with such an impactful presence.”