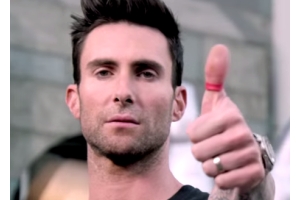 U.S. Department of Transportation statistics show cell phones are involved in 1.6 million auto crashes each year. These crashes cause a half-million injuries and take 6,000 lives annually. To help raise the visibility of this critical issue, Nissan has partnered with NBC Universal and Adam Levine to promote “Red Thumb Day” – inspired by “Red Thumb Reminder,” a program created by Steve Babcock of EVB advertising. Marking your thumb serves as an important reminder to not text and drive.

Levine, Maroon 5 frontman and coach on NBC’s Emmy Award®-winning singing competition, “The Voice,” has also joined in to help raise awareness for the issue. On Dec. 15, during “The Voice” broadcast, Levine will declare the following 24 hours “Red Thumb Day,” urging drivers to put their phones down when behind the wheel, not just on that day, but every day.

“The statistics are alarming. According to the University of Michigan Transportation Research Institute, a quarter of teens respond to a text message once or more every time they drive. Twenty percent of teens and 10 percent of parents admit that they have extended, multi-message text conversations while driving,” said Jeremy Tucker, vice president, Marketing, Nissan North America, Inc. “Together with Adam Levine, Nissan encourages drivers to put the phone down and get where they are going safely. A ’Red Thumb Reminder‘ may seem insignificant; however every time you see it, it reminds you to not text and drive.”

Nissan is encouraging drivers to join the Red Thumb movement by sharing photos tagged #RedThumb via their favorite social media channels. #RedThumb posts will be featured on a microsite, along with a special message from Levine supporting the cause.

Red Thumb Reminder bands will be available at local Nissan dealerships, and distributed to the in-studio audience at “The Voice” taping on Dec. 16.

For more information on Red Thumb and to find out where to pick-up a Red Thumb Band, visit www.redthumb.org.