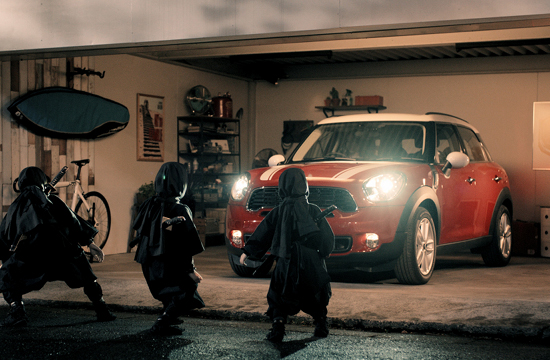 The latest film spot for Mini Japan by Beacon/Leo Burnett Tokyo to market its MINI Crossover range struck a chord with the Japanese audience with its charming story of ninja, a family and their Mini Crossover.

The campaign was developed to enhance the MINI Crossover range as a member of the MINI family, albeit with a bigger soul and playfulness. While previous campaigns focused on its functional benefits of R60 size, four-door offering, this latest campaign brings the focus back on the authentic spirit of MINI, which is all about its playfulness.

Running online and on TV, the 30-second spot’s opening scene shows a bright, full moon night where three nimble ninjas were making their way across the compound of a family home. As they reach the garage where a Mini Crossover is parked, the headlights came on to reveal that the trio were in fact three playful children in ninja get up. Mum is behind the wheels and hurries the kids into the car while asking where their dad is. As they drive away into the night, dad was shown clad as a ninja and stuck on top of a tree.