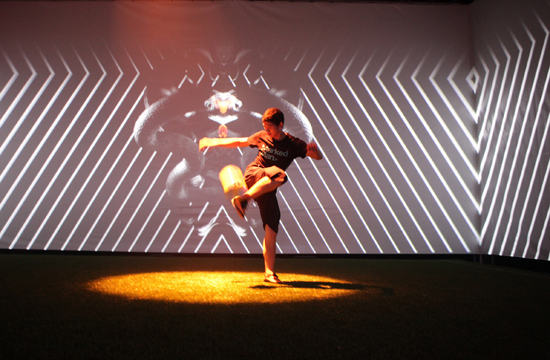 This revolutionary game sees for the first time, the convergence of virtual projection mapping and playing with a physical football. Introduced globally in May 2013, the Nike Hypervenom football boot made its Southeast Asia retail debut in August.

Launched in Bangkok, Thailand, at Parc Paragon, the ‘House of Deadly’ is a virtual stadium set up for four days. It allows spectators to experience the game and the opportunity to trial the Nike Hypervenom football boot. 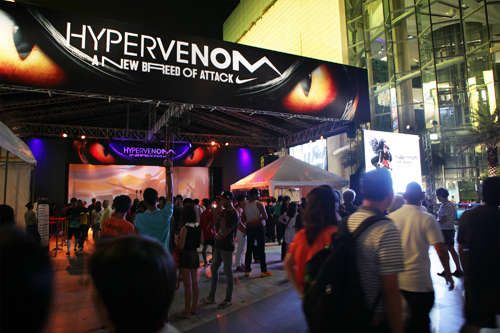 The 10x10x5m stadium, fitted with motion detection and interactive projection mapping, an advanced surround sound system and dramatic 3D effects creates an illusion of a real football match with a ‘deadly’ twist. It featured wild animals and beasts as moving targets that must be defeated while dodging physical objects in the form of lasers beams.

Once inside the virtual stadium, each player is challenged across a maximum of five levels. The objective is to successfully dribble a real football and hit the targets that randomly appear. Two ball launchers alternatively throw a new ball on each level. To stay in the game players have to control the ball and keep avoiding laser beams as ‘defenders’ strike from different directions and deduct agility points when ‘touching’ the ball. Laser beams track the ball using advanced motion detection technology and increase in number at each level. The game ends when the player either runs out of agility points, time expires, or level five is reached and completed successfully. Players receive an accuracy and agility score in the form of a digital and physical personalised memento. 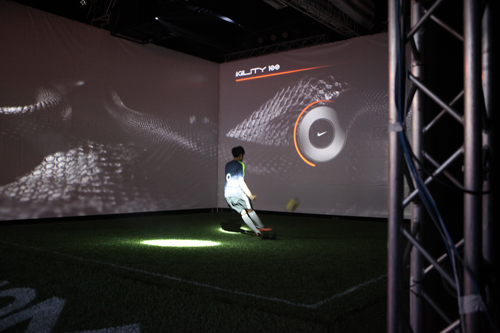 Said Miguel Andres – Clavera, Digital Innovation Director, BBH Asia Pacific: “This is one of the most exciting innovations happening in the gaming and sporting arena. To merge the physical world of sport with gaming is a technical, logistical and creative feat. We wanted consumers to experience the most compelling engagement possible with the Nike Hypervenom boot”