Produced by Hamlet, with creative by W+K Shanghai 'Dare to Become' envisions a future where the greatest football player is Chinese 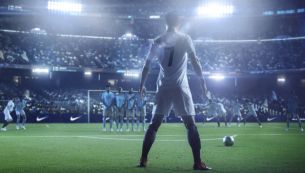 As World Cup fever gripped the world China, once again, watched from the sidelines. The last time China even made the tournament was all the way back in 2002 – a brief win in a long-struggling history that has left a nation of fans with little hope for a bright future. In fact, few even dare to imagine anything other than more of the same.
But more and more people in China are looking to the future with optimism.
Releasing a major football commercial in a country that wasn't even in the tournament might seem like an unusual choice for Nike, however this moment provided an ideal opportunity to present Chinese football fans and young athletes with a vision of what Chinese football could be, and who they could become.
Nike wanted to inspire China’s young football players by giving them a dream to chase. And having reached 170 million views in only a few days after launching, the film has clearly struck a chord.
Created by Wieden+Kennedy Shanghai and directed by Hamlet's Ian Pons Jewell, the commercial, Dare to Become, shows a future where the greatest football player, is now Chinese. Manchester City fills their roster with Chinese players, and all of England cries after being drawn in a group with China. It is a fun and ambitious future, but one a younger generation of Chinese players can believe in and are working to create.
Creative directors Matt Skibiak and Dong Hao commented, “Why can’t China be great? This film is clearly on the side of the athletes who believe it can be. Because if no one is willing to imagine going there in their heads, they’ll never get there in real life.
But the commercial isn’t pure fantasy. Nike recruited real teenage football players from the Nike Football League in Beijing, Shanghai and Guangzhou to star as the young players today who are doing what others don’t dare to believe – take China to the top of the football world.
Since the launch, Dare To Become has ignited a heated debate about the future of Chinese football. While some still refuse to believe in such a future, and see it as little more than a day dream, many others have been inspired by this vision and applauded the boldness of its prediction.
view more - Creative