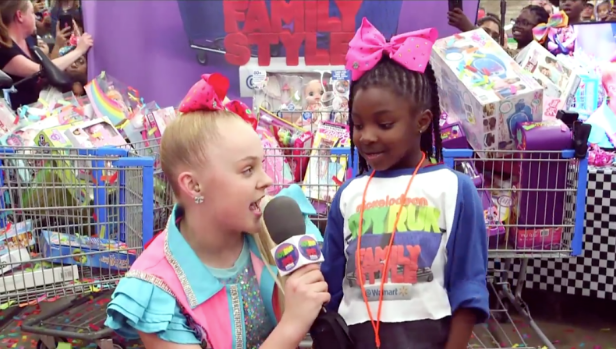 Director Carrie Stett, represented by Washington Square Films, brings serious '90s television nostalgia to Gen Z in 'Nickelodeon Toy Run - Family Style' via Facebook Live. The show, which streamed on Nickelodeon’s Facebook page last night, was hosted by Nickelodeon star JoJo Siwa (of 'Dance Moms' fame), and gave one lucky grand prize winner a shopping spree in the toy aisles of the Walmart in Bryan, Texas, to stock up on their favourite, must-have holiday toys. The live stream took in over 509,000 views, with over 900 comments from fans interacting in real-time with the shopping event.

Nickelodeon held the sweepstakes to choose three grand prize winners, inviting kids 6-12 and parents of kids 6-12 to enter for a chance to win the mad-dash shopping spree. From over 150,000 entries, three winning kids and their families were chosen.

In addition to a live view of an epic toy shopping spree, viewers were encouraged to interact in real-time, being called to vote for the kickoff dance (floss or running man - floss won, per usual) and Faith’s finish line celebration (surprise emoji for confetti; laughing emoji for silly string).

- The show kicks off with an overview of the rules of the Toy Run:

- The winner has three minutes to fill up shopping carts with up to $3000 toys.

- If the winner grabs one of the 5 specially marked items, they’ll get an extra 10 seconds added to their Toy Run.

- If a large item, such as a bike, is selected, 5 stickers will be available to put on top of it and keep moving (to avoid overcrowding the cart).

- The winner can tag a family member to help for 15 seconds by blowing a whistle.

The Facebook Live show called for six cameras, switched live, with Stett at the helm to provide viewers with the most action-packed and exciting experience possible. Stett worked closely with Nickelodeon’s team to develop the concept and tailor it for the interactive Facebook Live platform. The stream included custom graphics, sound effects and a dazzling confetti finale. “My goal was to take inspiration from the original TV format and mold it into something fresh and new. Staging this live, on social media with audience interactivity gave it an ‘anything can happen’ excitement that made for a thrilling experience all around,” says Stett.

JoJo maintained her signature upbeat and wacky energy throughout the experience, getting the adorable winner Faith psyched up for the shopping spree while taking viewers down the toy-filled aisles in anticipation of the run. After a lively floss, Faith kicked off her toy run with her mum pushing the cart to avoid any accidents from such a petite operator. Faith’s pure joy and glee are contagious as she gingerly makes her way down the aisles, hoisting boxes bigger than herself into the cart and taking in the overwhelming excitement of the extravaganza.

The not-to-be-missed moment of the entire live stream is when Faith tags in her mum for a 15-second pinch-shop. Her previously encouraging and patient cart-pushing mum transforms immediately into a shopping ninja not to be messed with, using her arm as a shovel to sweep entire shelves of toys into the cart.

Stett is a pioneer in Facebook Live production and creative storytelling in live streaming, working with brands to increase engagement and interaction with consumers. She has directed over 20 multi-camera live streams, reaching millions of views per video. She has worked with such top brands as White Castle, Kleenex, Jell-O, Toyota, Walgreens, Home Depot, MLB and more.