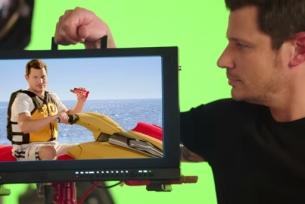 For this campaign, both Peanut Butter Left TWIX and Peanut Butter Right TWIX have enlisted the services of Nick Lachey to serve as spokesperson for their respective brand.  Of course, this puts Nick in a somewhat tenuous situation, advocating on behalf of two “competing” companies and highlighting the absurd rivalry between the two.  Which is also a way of having fun with celebrity endorsement campaigns.