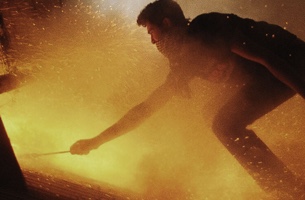 The filmmakers at the creative collective known as Variable - represented by Nicholas Berglund - have found another captivating story to tell. In “Rocket Wars,” which debuted on their Vimeo channel on June 30. Director Salomon Ligthelm and Cinematographer Khalid Mohtaseb travelled to a remote Greek island to witness a war-like confrontation that’s actually a celebration of peace.

Told with documentary style interviews and stunning visuals, “Rocket Wars” is a five-minute account of a traditional event that takes place in the village of Vrontados on the small Greek island of Chios. There, for over a century, parishioners of two Greek Orthodox churches have engaged in a mock battle on Holy Saturday, firing more than 100,000 homemade rockets at each other’s churches once the sun goes down.

“Rocket Wars” is an experiment in short-form storytelling in which the producers tap into the latest digital image capture technology to create cinematic images of startling clarity and emotion. Often working in a high-speed format that slows down motion to a meditative and surreal pace, “Rocket Wars” represents a hybrid mix of narrative and documentary designed to elevate the storytelling capabilities of both forms.

Ligthelm and the core Variable production team were inspired and eager to film the event this year upon learning of its existence. The director says he felt that, given the accelerated appetite of social media today, this may be the last year they’d have had an opportunity to document it before it becomes something of a media circus.

“And our aim here is not to commercialize this, but to create a timeless art piece similar to what we did while covering the Indian festival of Holi,” Ligthelm adds. “We’re looking to share the culture and tradition of ‘Rocket Wars,’ and to celebrate the art and beauty of the event. Our overall aim in making this film is to keep it pure.”