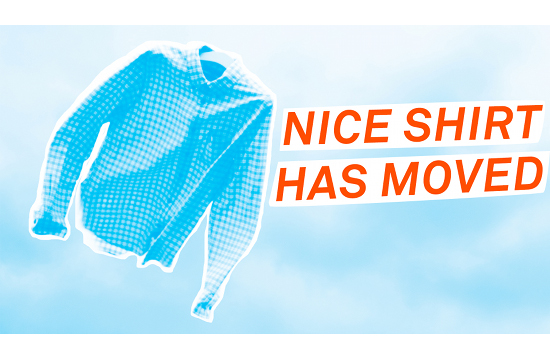 Nice Shirt Films are delighted to announce that they have moved office with a new set up and new talent to go with it.

After seven years, over two hundred jobs and far too many walks up the four flights of stairs in our old office in amongst the sights and smells of Fitzrovia, we have made the move to the bright lights and buzz of Soho - 28 Fouberts Place, just off Carnaby Street.

Our newly renovated premises, set over three floors, includes two new Flame and Baselight suites in our first floor facility, to deliver a complete visual post-production package, in addition to our production offering.

To celebrate their move, they've put together a tiny movie for your enjoyment:

The Nice Shirt roster has recently expanded to accommodate nine directors with the signing of three young talents - Liz Murphy, Borkur and Jan Kwiecinski. Jan has previously collaborated with Vice Films and Harmony Korine in the three-part feature “The Fifth Dimension” and has just finished his first UK job for Brooklyn NYC rebel ping-pong brand, Thompson Punke. Liz joins us having applied her creative talents to the intricately animated and utterly charming Homebase and RAC spots. Borkur comes from an impressionistic photography portrait background and directed his first job for Nice Shirt recently with the immaculately observed Cif “Burglary”, received with much industry praise.

The three freshmen bring an aggregate of enthusiasm, energy and creativity, complementing the existing roster whose collective aim is the production of quality creative output.

Stuart Douglas continues to direct epic photography and intimate portrayals, while Jon Hollis' recent work demonstrates his problem-solving abilities with cutting-edge visual effects marrying complex scenarios and performance. JJ Keith’s been busy making people laugh with spots for KFC and Ice Dew and Jesper Ericstam's own brand of quirky comedy and delightful eye-for-detail has garnered industry-wide praise in his films for IKEA and Libresse amongst others. Master storyteller and image-maker, Sean Meehan, has been impressing with his stunning work for Tourism Australia's global campaign and his subtly brilliant spots for VW. Tareq’s recently completed Budweiser spot for the FA Cup final was suitably epic: a three month shoot for a two minute film, broadcast only once before kick-off to millions at home and 90,000 fans inside Wembley. He continues to build his diverse reel with online fashion films for Top Shop, Zara and lately for Pepe Jeans starring model of the moment, Cara Delevingne.

As we make the move to a brand-new location, we carry on doing what we've always done: using our range of talents and knowledge to realise an array of creative filmmaking projects, of any size, shape or concept across a variety of platforms to an extremely high standard: bespoke moving-images, hand-finished in London.