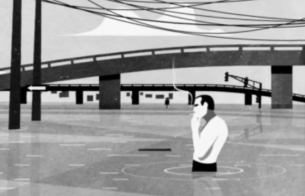 A one minute animation to mark the 10 year anniversary of Hurricane Katrina (which will take place on 29th August), has been released by ethical creative agency, Nice and Serious.  The animation, which was developed as part of an in-house project, offers people a chance to reflect and remember those who lost their lives and many who continue to be affected.

‘One minute for Katrina’ is without music, voiceover or text, allowing the minute’s silence to be the most poignant part of the film. The story of death and destruction is told through black and white illustrations and soundscape, designed to create an unsettling experience for the viewer. The animation is based upon iconic photographs that were taken in the aftermath of Hurricane Katrina.

Hurricane Katrina claimed the lives of 1,833 residents of the gulf coast region. It was the single most catastrophic natural disaster in U.S. history. The total cost of Hurricane Katrina has yet to be tallied, however it currently stands at a total of 60 billion.

Serafima Serafimova highlighted: “It was our way of remembering and hopefully helping others remember the event and its aftermath too. Often our busy lives don’t leave many opportunities for us to stop and reflect - even when it’s only for a minute. We hoped that by producing this animation we could give people the space to do this"