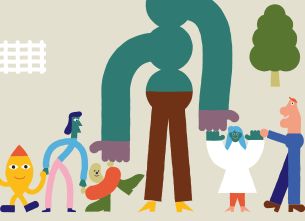 To celebrate reaching 2bn monthly active users, Facebook’s The Factory have worked with Nexus Studios to celebrate the milestone with ‘Good Adds Up, a personalised animated film which thanks users for being part of the community, for sharing moments and more.

Directed by Nexus Studios’ Johnny Kelly, a team of Nexus Studios’ in-house animators and compositors brought a cast of characters to life who come together to do amazing things, guiding you through your own film that’s populated by your photo moments as shared on Facebook. Nexus collaborated closely with The Factory’s creative and technical teams to design and execute the overall look and feel for the film.

The campaign kicks off with the central idea of ‘Good Adds Up’ and Johnny’s initial idea sprung from that.  He says: “I thought of ways these characters could ‘add up’ too, coming together and becoming more than the sum of their parts.”

Johnny brought designers Nous Vous on board saying “I’m a long time fan but had never seen their work animated.  Our animators really loved making those designs move because each character was so different to the last.”

He adds: “This undoubtedly has the biggest audience of anything I’ve worked on which is quite terrifying and comes with its own set of challenges. For example we had to invent a set characters that didn’t feel overly-specific to one country or another. But that’s the nice thing about animation; weirdly it’s easier to identify with a character if he’s a little abstracted, than one that is figurative and realistic.”