Nexus' Smith & Foulkes Ask 'What's the Best That Can Happen?' with Cheery Film 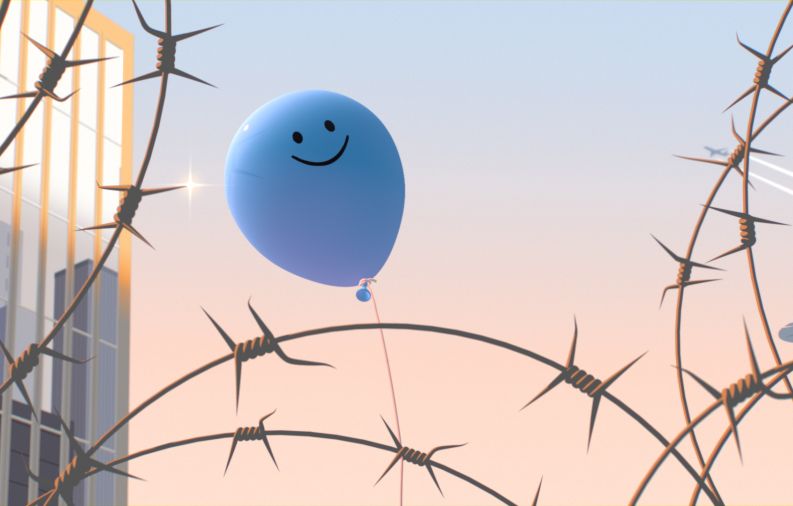 Nexus Studios today announce the latest animated film from award-winning director duo Smith & Foulkes. Their latest work ‘Balloon’ for Sonnet Insurance, part of a campaign from creative agency, Johannes Leonardo, is an animated film with a positive interpretation of insurance. The spot will run online and on television in Canada.

The animation follows the perilous journey of a smiling, happy-go-lucky balloon hero character which narrowly evades its seemingly inevitable demise as it encounters a series of ominous threats, in the shape of sharp corners and pointy edges found in regular life settings. The balloon’s plethora of near misses is choreographed to the up-beat and optimistic song “What’s the best that can happen?” to provide the rhythmic flow for the film, with every gesture and movement arranged to precisely synchronise with the music.

Smith & Foulkes used 3DS Max and Adobe After Effect software to create the 3D animation, and leveraged a soft and dreamy colour palette to create an aura of peaceful serenity as a juxtaposition to the constant threat of imminent disaster. The choice of a balloon, which is an inanimate object, enabled Smith & Foulkes to portray a much more ludicrous degree of jeopardy than would be possible with humans, which enables the film to convey an uplifting, comic tone rather than a fearful menacing one.

In order to emotionally engage the viewer, the balloon is anthropomorphised through a smiling face which provides the hero with personality and imbues it with a little of its own life force. This connects the viewer with the hero as it has a series of close encounters with disaster.

Adam Foulkes, one half of the directing duo, said: “This is a happy commercial that subverts the idea that an insurance company can’t be positive whilst also revealing the hidden dangers of everyday life. There are very few lyrics to the soundtrack so the visuals really had to carry the story in order to ensure the viewer could identify with our floating hero.”

Alan Smith,co-director added: “Despite the viewer knowing that it is just a blissfully unaware balloon, there is something in its smiling face that makes you root for it and really ask what is the best that could happen!? We love taking small and inconspicuous concepts and expanding them into epic tales.”

Head of Production: Dana May